Sometimes what we see with our eyes can be deceiving, black and white optical illusions are one such example of this strange phenomena because more often than not perception is an incredibly subjective experience—and our brains are not quite as honest as we might think.

A recent BBC documentary, part of the broadcaster's series Colour: The Spectrum of Science about how the brain perceives color, highlights how perception is a very tricky, and tricksome, business.

In the clip above from the show they give an example of how, by staring at a blue dot in the center of color-corrected image, you can trick the brain into seeing color in a black and white photo of a castle.

To begin with you stare at the image of the castle in false color, focusing on the dot for 15 seconds or so. Then the image suddenly flips to black and white and when it does your brain is momentarily conned into seeing the photo in full color. It only last a few seconds but it's quite bizarre. Try it, it really does work.

As to the science behind black and white optical illusions? IFL Science has the explanation:

It’s all to do with our cone cells, one of the two types of photoreceptors within our eye’s retina, which are responsible for color vision. We have three types of cones, which are sensitive to blue, green or red wavelengths of light. When we’re exposed to a lot of one color, that particular type of cone gets overstimulated and becomes “tired” and unresponsive. This leaves you temporarily with the use of only your other two types of cone, which show the opposing “complementary” color (i.e red versus green and blue versus yellow). After a few seconds, the cones “recharge” and you’re able to perceive that color again. 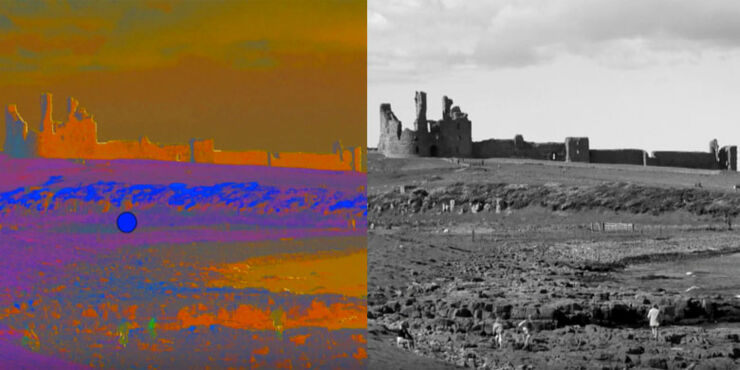