The dick pic game is changing. At least it is when it comes to photographer Soraya Doolbaz who has raised the practice of photographing a male member into a 'upstanding' profession.

Guys sending girls a pic of their manhood is creepy common practice in today's dating world, so Doolbaz—after getting sent her "fair share" over the years—decided to have some fun with it.

Soraya recounts of how she came up with the idea, "I would get a ton of dick pics and my friends would get them, and we would show them to each other and some dick pics were better than the other ones, and I thought, 'what if I took them with a professional camera?' And then I was walking through a Walmart and I saw a couple of dolls. I just kind of put two and two together and thought I could create a personality out of penises."

And by personality she means turning snapping your pecker into a high fashion photo shoot. There's no grainy or blurry smartphone photos here, instead Doolbaz dresses penises up in various little outfits and then takes a pic of them.

"My goal with all this was to make people laugh. I wanted to create comfort and confidence around sexuality for men and women. Men should be proud of their dicks regardless of its size or characteristics." Doolbaz writes on her website. Be warned clicking that link if at work though. BE. WARNED.

Now rather than receiving dicks pics from random men, she gets guys' wives and girlfriends coming to her to take a pic of their partner's dong dressed up in, say, sunglasses and a hat, or a tiny policeman's uniform. She has a whole mini wardrobe of dick garments.

She's also exhibited her work at Miami Art Basel where she's sold limited edition prints for $10,000 each, and produces novelty calendars and mugs with the dressed up dicks on.

Some of them are dressed up to look like Donald Trump.

Or maybe it's just Donald Trump. It's hard to tell, I guess. 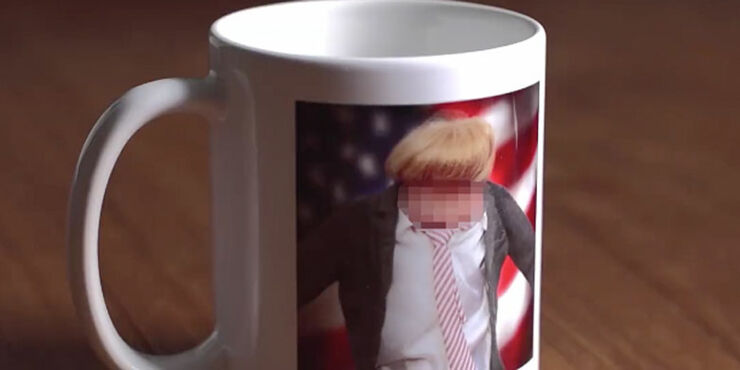