EBOLA! PANIC! EBOLA! OK everyone it's time for the facts. WE NEED THE FACTS! And Shep Smith is here to give you those facts in a manner not unlike a teacher talking to children at an elementary school. But aside from his delivery, it's a rare chance to see Fox News deliver a news piece without massive amounts of hyperbole and sensationalism. Somebody better check that hell hasn't frozen over.

It's a welcome antidote to the current media hysteria, dining out with stories like the virus could go airborne. Or that 911 can't even say the word over the radio for fear of causing some kind of societal meltdown.

Or, you know, the virus will mutate into an Ebola zombie and attack us while we sleep!

Great to see there's a hashtag dedicated entirely to scaremongering around #EbolaAirborne—that'll help matters (I'm being sarcastic here). But, if you are concerned about the man who died from Ebola in Dallas, and the fact that two nurses who cared for him when he was in the later stages of the virus have now got it, then listen to Shep. "You should have no concerns about Ebola at all. None. I promise." Thanks Shep.

I feel so much better knowing that Shep Smith says the Ebola thing is no big deal.

But sarcasm aside, people welcomed this rational approach that favors clarity over hysterics.

Shep Smith: America's last honest network news man? #Ebola panic is ‘not worth ratings … and we all need to stop it’

Even if they couldn't believe it was coming from Fox News.

No way, this can't be fox news. They are rational, direct, and fact based on Ebola. What?

Shep's best advice for you and your family at this moment. Get a flu shot. But just in case you want to keep the hysteria alive, you can keep logging onto this site Ebola Near Me which will tell you how many miles away from you Ebola is.

While it may look like app developers cashing in on the panic, they do put in the following—plus links to sources that give facts without hype—maybe just to make themselves feel better, but maybe also to counter the fear mongering from news outlets: "Decrease hysteria and increase awareness. Read, educate yourself, and change the conversation.

The West's myopic approach to media coverage of global events is hurting everyone." 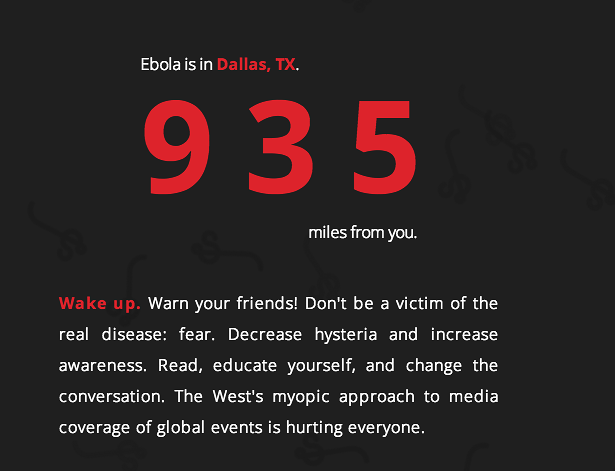