THERE were disgruntled mutterings about boycotts and premature accusations of prejudice as everyone waited for interminable seconds for the final name to be called.

It was the second semi of the Eurovision Song Contest in Copenhagen and with nine countries already named to proceed to the grand final, six entrants trembled with nervous tension, desperate to know whether they would claim the last berth.

When the hosts revealed Austria’s controversial contestant Conchita Wurst had won the votes to make the final, almost 1000 accredited media covering the event let out an almighty cheer.

The loud roar of approval in the press centre rivalled that of the capacity crowd of more than 10,000 fans inside the stadium who had leapt to their feet after Conchita’s performance of Bond-theme-in-waiting Rise Like A Phoenix. 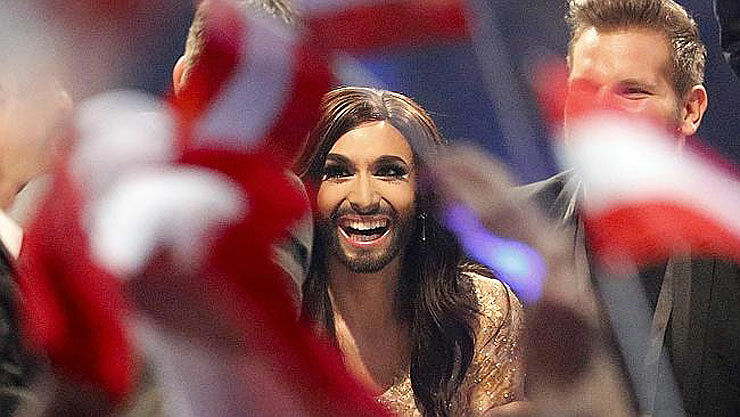 National pride aside, there were two resoundingly disparate favourites among the media pack.

Poland’s Donatan and Cleo captured support from the international press with the Benny Hill-esque naughty milk maid performance of their song We Are Slavic.

Everywhere the performers and their milk maids went, a stream of selfies would follow.

From the opposing end of the Eurovision spectrum was the other media pick, bearded drag queen Conchita who looks better in a ballgown than most Hollywood actresses during awards season. 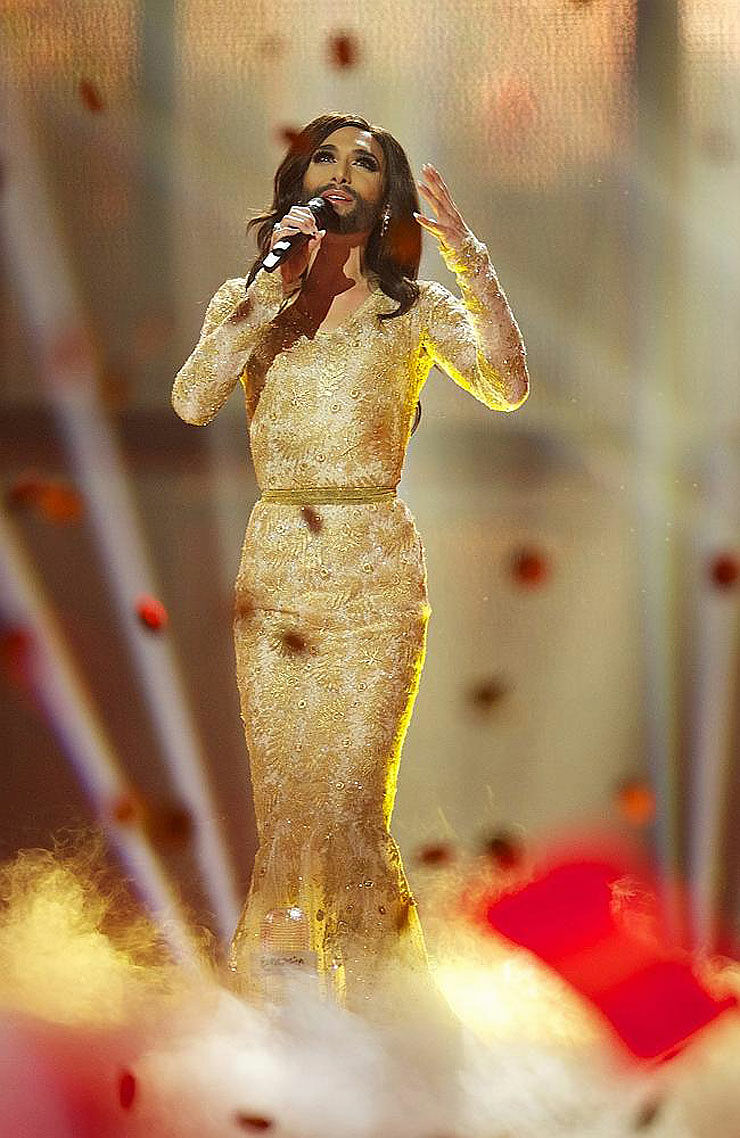 But it wasn’t the way she filled the dress which had fans’ hearts aflutter and critics championing her contention for the title.

The alter-ego of 25-year-old singer Tom Neuwirth created after trying his luck at several television talent quests, Conchita debuted on Austrian television in 2011 and made a bid to represent her country at Eurovision the following year, coming second in the national final.

Last weekend, she won the competition to almost universal approval of fans and commentators. 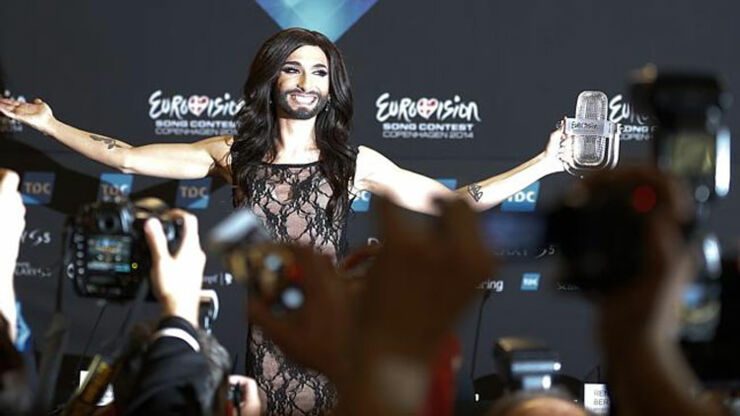 The push for Conchita to poll the most votes, alongside the jeers for Russia from some sections of the crowd, charged a silly singing contest with political overtones.

While its reputation may have been forged by cheesy songs, ridiculous costumes and over-sized, over-the-top props, Eurovision has often worn its social conscience loudly and proudly over six decades.

Originally devised as a cultural event to unify the disparate nations of Europe in the decade after World War II, the hashtag for the Danish competition this year was #JoinUs.

The Ukraine were slightly ahead of the pop prop war with their giant human hamster wheel, although the choreography employed by the 17-year-old Tolmachevy twins on their seesaw to keep them balanced was indeed, impressive. 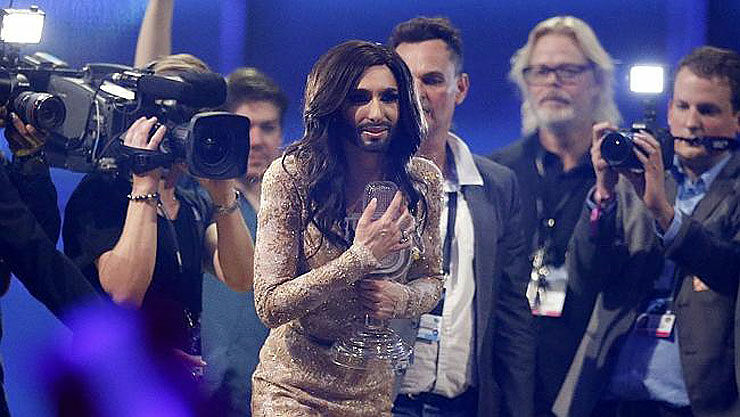 Talented act … Conchita Wurst representing Austria who performed the song ‘Rise Like a Phoenix’ hugs the trophy as she is surrounded by media after winning the Eurovision Song Contest. Picture: Frank Augstein Source: AP

Yet the boos which greeted the innocent-looking sisters in the semi-final and the final probably had less to do with the geopolitical strife in the north of the continent and more to do with Russia’s draconian anti-gay legislation.

There was a small conservative anti-Wurst movement who protested her selection as Austria’s candidate last year and the singer used every opportunity to speak out against discrimination in her campaign for the Eurovision trophy.

Backstage at the dress rehearsals and semi-finals, everyone wanted a photo with Conchita and to support her stand. 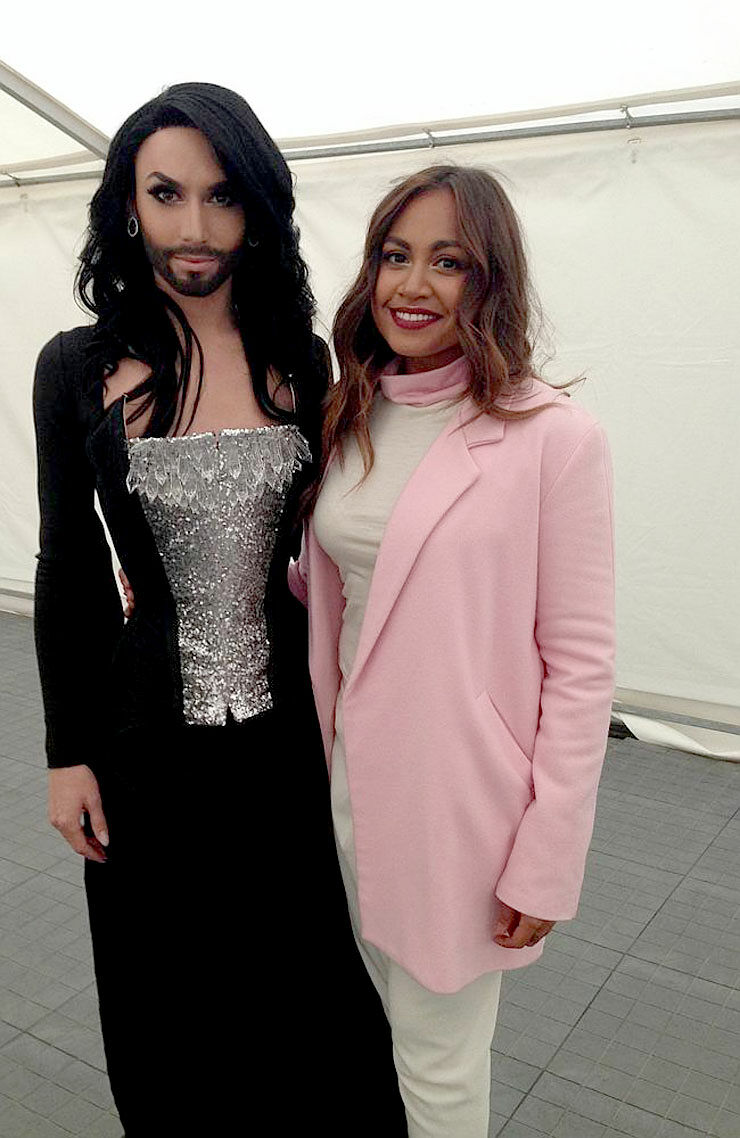 They were also generally in agreement that Eurovision organisers had been brave to focus this year’s event on the message as much as the music.

A steady dialogue on Facebook promoted the determined diva’s pro-tolerance platform in the months ahead of the Copenhagen contest and the message remained relentlessly on point throughout the week of rehearsals and competition.

“Yesterday was a victory not just for me, but also for those people who believe in a future that functions without discrimination and which is based on tolerance and respect,” she said after her homecoming welcome to Vienna. “That was transnational and had nothing to with east and west.”