While we continue to plunder the earth for fossil fuels or look for alternatives in renewable energy technology, scientists have been working on creating a fusion reactor. Using similar principles to how our own sun and other stars produce energy, this nuclear fusion reactor could, if it works, generate near endless clean energy.

The fusion reactor is known as the Wendelstein 7-X (W7-X) and is located in Greifswald, Germany. Called a stellarator it was switched on last year after a nightmarish 1.1 million hours (19 years) of construction. It has a diameter of 52 feet and cost $1.1 billion. If you've ever seen the sci-fi film Event Horizon you will see a similarity and will probably be getting a bit worried about the outcome of activating it.

Much like when they switched on CERN and people were joking that it was going to swallow the universe, people have also speculated that the W7-X could open a portal to hell or cause some other dimension to open up. But, disappointingly for sci-fi fans but not for clean energy advocates, since it's been in operation it has successfully been creating plasmas from helium gas—and since February 2016 from hydrogen.

A recently published study has shown that all is going as planned with the reactor and it means they can now proceed to the next stage of the project.

Here's a little explainer from Space.com on how fusion energy works:

Unlike a traditional fission reactor, which splits atoms of heavy elements to generate energy, a fusion reactor works by fusing the nuclei of lighter atoms into heavier atoms. The process releases massive amounts of energy and produces no radioactive waste. The "fuel" used in a fusion reactor is simple hydrogen, which can be extracted from water.

However, to achieve fusion, scientists must generate enormously high temperatures to heat the hydrogen into a plasma state. The plasma is so hot, in fact, that it would instantly burn material used to contain it. That's where the stellerator design comes in. The W7-X device confines the plasma within magnetic fields generated by superconducting coils cooled down to near absolute zero. The plasma — at temperatures upwards of 80 million degrees Celsius — never comes into contact with the walls of the containment chamber.

The W7-X is the world's largest and most sophisticated stellerator and is currently operated by Max Planck Institute for Plasma Physics in Germany.

What makes it so important and exciting is that if the scientists can make it a success—and we could be many, many years away from that—it could solve the earth's energy problems without causing lasting damage to the planet.

"The fuel source is found in seawater in quantities sufficient to last tens of thousands of years," David Gates, a research physicist working on the project said. "The waste product is helium, an inert gas. A viable fusion reactor would provide a secure, plentiful and environmentally benign energy resource to all nations."

As such the project has been a collaboration of scientists from across the globe. And now that everything is on track Gates says the recent research "lays the groundwork for the exciting high-performance plasma operations expected in the near future." 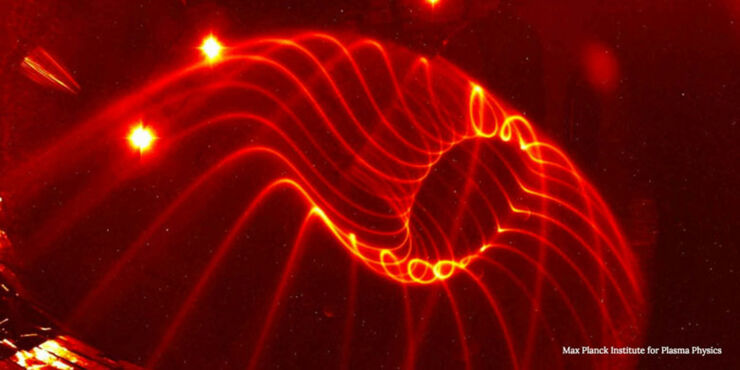