Born in 1854 Hertha Marks Ayrton was a pioneering British female inventor, mathematician, engineer, physicist and a dedicated suffragette. She received the Hughes Medal in 1906 from the Royal Society for her work on electric arcs, and her studies on water and sand ripples. She was the fifth recipient of this prize. It's been awarded annually since 1902, in recognition of an original discovery in the physical sciences, particularly electricity and magnetism or their applications.

Ayrton was born in Portsea Hampshire (née Phoebe Sarah Marks), UK on 28th April 1854 and was the third child of eight children born to a Polish Jewish watchmaker named Levi Marks, and Alice Theresa Moss, a seamstress. When she was a teenager she became agnostic, changing her first name to Hertha after the German earth goddess featured in Algernon Swinburne’s poem “Hertha” (1869).

In 1863 aged just nine, Ayrton was invited by her aunts, who ran a school, to live with her cousins and be educated with them in northwest London. It was here that she was introduced to science and mathematics. In 1876 she went to Girton College at the University of Cambridge to study mathematics. She also passed the Cambridge University Examination for Women in 1874, with honours in both English and mathematics.

In 1885 she married electrical engineer William Ayrton, and they had a child called Barbara Ayrton. Barbara became a labour MP in 1945 until 1950 and was also a suffragist for Womens’ Rights.

Hertha Marks Ayrton died on 23rd August 1923 of septicaemia as the result of being bitten by an insect.

The Inventions Of Hertha Marks Ayrton 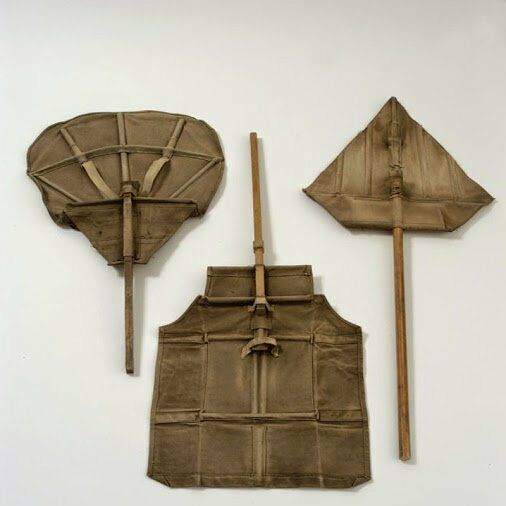 In 1884 Hertha invented mathematical line dividers, her first significant work. They are a tool for dividing a line into equal parts and feature a series of parallelograms. They are used by artists, along with architects and engineers.

In 1915 Hertha invented a fan to disperse poisonous gases from the trenches at the front line of World War I. Known as the "Ayrton Fan" it was based on the knowledge she'd previously gained about currents in water and air movements. The fan was a piece of waterproof material with pieces of cane supporting it. 104,000 were issued to the western front.

From 1883 until her death Hertha registered 26 patents in total. These included five for mathematical line dividers, 13 on arc lamps and electrodes, and eight on air propulsion.

The 'hissing of the electric arc' as presented to the Institution of Electrical Engineers in 1899 by Hertha Ayrton.

In 1893 Hertha began researching electric arcs. These are highly luminous, extremely hot discharges of electricity which happen between two electrodes. Arc lamps were at the time used for public street lighting but often hissed and flickered. Hertha's work helped fix the problem and she published a book on the subject The Electric Arc in 1902.

“In experimenting on the arc," she famously wrote, "my aim was not so much to add to the large number of isolated facts that had already been discovered, as to form some idea of the bearing of these upon one another. And thus to arrive at a clear conception of what takes place in each part of the arc and carbons at every moment. The attempt to correlate all the known phenomena, and to bind them together into one consistent whole, led to the deduction of new facts. Which, when duly tested by experiment, became parts of the growing body. And, themselves, opened up fresh questions, to be answered in their turn by experiment.”

It was for her work on ripples and electric arcs that in 1906 she was awarded the Hughes Medal by the Royal Society.

The Origin and Growth of Ripple Mark 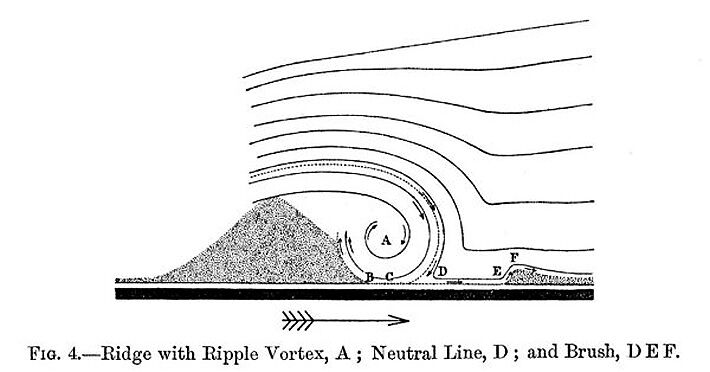 Hertha Marks Ayrton: The Origin and Growth of Ripple Mark.

Her other major contribution to science was her work on water and sand ripples. Her interest in this began while in the seaside town of Margate, UK in 1901 when her husband was recovering from exhaustion. She started analyzing the patterns that formed when water washed over sand and conducted hydrodynamic experiments to explain their creation. Their formation remained a mystery to scientists until Hertha read her paper "The Origin and Growth of Ripple Mark" to the Royal Society in 1904. It was later published in the Proceedings of the Royal Society.

She wrote in her paper "To any one who, for the first time, sees a great stretch of sandy shore covered with innumerable ridges and furrows. As if combed with a giant comb, a dozen questions must immediately present themselves. How do these ripples form? Are they made and wiped out with every tide, or do they take a long time to grow, and last for many tides? What is the relation between the ripple and the waves to which they owe their existence? And a host of others too numerous to mention."

She also recounted the difficulties she faced in her observations and experimentation and how she reached a conclusion: "The solution of the problem cost me several weeks of observation and experiment, yet it was absurdly simply when it came to me. It was that a single ripple, existing alone, in otherwise smooth sand, initiates a ripple on either side of it. That each of these ripples produces another on its farther side-these in turn originate on their farther sides, and so on, till the whole sand is ripple-marked."

Even though she was an accomplished physicist, had studied at Cambridge, and was the first female member of the Institute of Electrical Engineers Hertha Marks Ayrton wasn't allowed to become a Fellow of the Royal Society.

However, if she was around today, this most certainly would not be the case. In fact in the video above, "The Fight for Fellowship" from Royal Society YouTube channel Objectivity, they look at some of the objects and documents they have at the Royal Society relating to Hertha Marks Ayrton—including her application for Fellowship.

These also include a photograph of her in her laboratory and a report she wrote in 1901 about electrical arcs. As a mark of her brilliance the reviewers, the Referee's Reports, all agree that the paper should definitely be published in Philosophical Transactions of the Royal Society, the science journal associated with the Fellowship. And it was published in it a year later.

But regarding her becoming a Fellow, the world wasn't quite as progressive. The video does show that she was nominated to become one by John Perry, a pioneering engineer and mathematician, who also submitted her electrical arc paper to the Royal Society. The Society even has her 'Certificate of a Candidate for Election' including a write up of who she was and her accomplishments, which indicates that there were people who really wanted her to become a Fellow.

So what happened? Why wasn't she made one? Well, the next step the Royal Society did was take legal advice to see if they could actually elect a woman. And the answer came back that, no, on legal advice they couldn't elect a married, or unmarried, woman. So we can blame the lawyers for stopping Hertha Marks Ayrton becoming a Royal Society Fellow. It's always the lawyers.

Fortunately, as the years went on things began to change. Letters from The Women's Engineering Society and others kept asking if scientifically qualified women were now eligible for Fellowship. And, eventually, due to them constantly referencing the passing of the Sex Disqualification (Removal) Act 1919, and threats pf lobbying, the Royal Society took legal advice once again and were advised that, yes, women were now allowed. That wasn't until 1945. 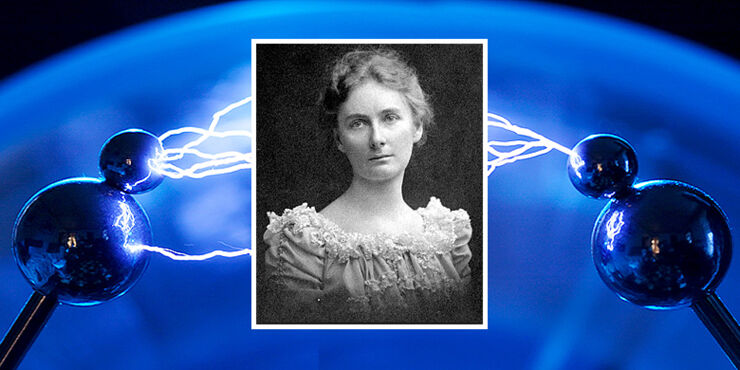 Hertha Marks Ayrton was active in suffrage rallies between 1906 and 1913. She was also a member of the Woman's Social and Political Union where she became one of their largest financial contributors.

She was a founder of the International Federation of University Women and the National Union of Scientific Workers. After her death in 1923 a friend of hers, Ottilie Hancock, endowed the Hertha Ayrton Research Fellowship at Girton College at University of Cambridge.

In 1899 after she read a paper to the Institution of Electrical Engineers (IEE) she was elected its first female member.

She's is behind the famous quote, "An error that ascribes to a man what was actually the work of a woman has more lives than a cat."

She was friends with novelist George Eliot, who was also an advocate for women's education and supported her application to Girton College. When Eliot met Hertha, Eliot was working on the novel Daniel Deronda which features a character called Mirah. Although conceived before the two were acquainted the final character of Mirah in the novel bears many physical and personal characteristics with Hertha.

Her work on electric arcs was a forerunner to the field of plasma physics.

She was a Google Doodle in 2016 which celebrated what would have been her 162nd birthday.