4chan appeared to be at it again. News media were reporting that the site was trolling actress Emma Watson after she gave a speech at the United Nations about gender equality at the weekend. Watson is the UN Women’s goodwill ambassador and was there to launch the HeForShe campaign, which wants men and women to both work together for gender equality.

"I want men to take up this mantle." said Watson. "So their daughters, sisters and mothers can be free from prejudice but also so that their sons have permission to be vulnerable and human too—reclaim those parts of themselves they abandoned, and in doing so be a more true and complete version of themselves.” You can watch the entire speech in the video above.

Sites, including the BBC and the Guardian, reported that 4chan responded to this speech by launching the website emmayouarenext.com, threatening to release nude pics of the actress because users of the site were misogynists and anti-feminist. The website featured a countdown ending on midnight on Friday when the pics were due to be published.

Watson herself was vocal on Twitter about The Fappening, which happened at the start of September and is said to have originated on 4chan.

Even worse than seeing women's privacy violated on social media is reading the accompanying comments that show such a lack of empathy.

But the whole website now looks like it's been part of a massive hoax, orchestrated by viral marketing company Rantic Marketing who claim they were hired by various celebrity's publicists. This Reddit thread appears to verify this explaining "Rantic.com, and emmayouarenext.com are hosted on the same server. They are connected to FoxWeekly, who where the first Website who broke the News about Emmayouarenext."

So it appears it's all part of a smear campaign by Rantic Marketing in response to The Fappening. If you now click on emmayouarenext.com it redirects you to rantic.com, showing the 4chan logo with a red cross through it and hashtag #SHUTDOWN4CHAN (see below).

One can only hope at this point that 'viral marketing experts' Rantic know what they are doing and got in touch with Emma Watson first before doing this—and it's not just some sort of self-publicity stunt for their own company.

" We have been hired by celebrity publicists to bring this disgusting issue to attention. The recent 4chan celebrity nude leaks in the past 2 months have been an invasion of privacy and is also clear indication that the internet NEEDS to be censored. Every Facebook like, share & Twitter mention will count as a social signature -- and will be one step closer to shutting down www.4chan.org. "

Who are we?
Rantic is a social media marketing enterprise that has participated in some of the most viral campaigns and music videos. / Brad Cockingham (Founder & CEO)

One Facebook user, Hygor Veronese, in the comments under the text above replies with: #SHUTDOWNRANTIC— which is now gaining social momentum on Twitter. 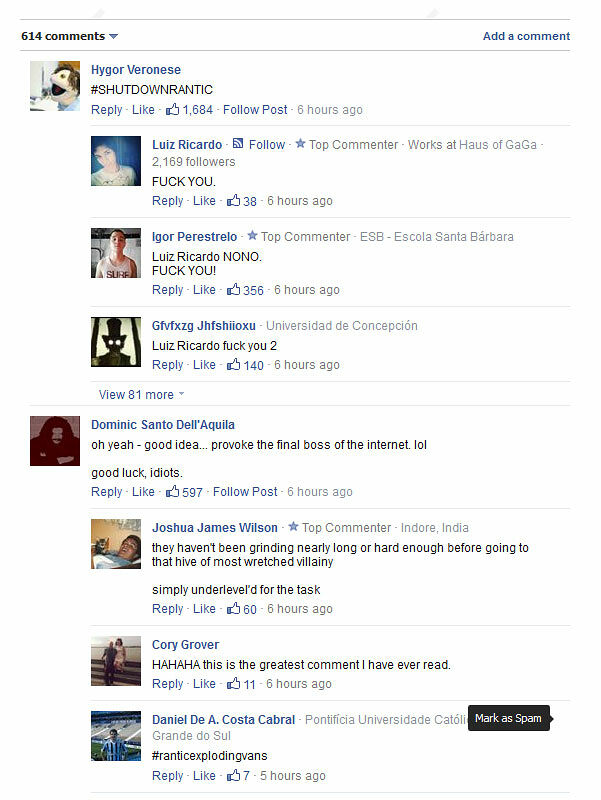 Update: Rantic.com is run by SocialVevo, who were behind the Emma Watson countdown and the 4chan smear campaign, which were both part of a publicity stunt for their marketing products.