The digital terrorists won. The mysterious group, calling themselves the Guardians of Peace, were behind the cyber attacks on Sony Pictures which started on 24 November and caused embarrassment for Sony as private email conversations were leaked.

The attack, which the FBI is supposedly confirming is the work of North Korea, is a reaction to the upcoming release of the film The Interview starring Seth Rogen and James Franco, which sees them being recruited by the CIA to kill North Korean leader Kim Jong Un (you can see his violent death scene from the movie above). 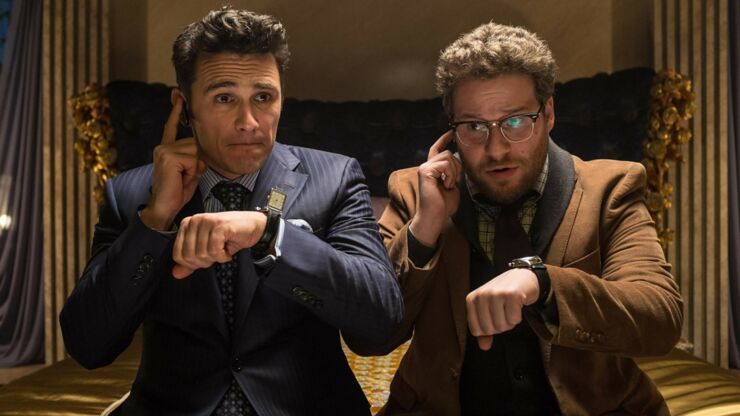 North Korea took offense to the movie and called it an act of war and launched the cyber attack against Sony via hacker collective Guardians of Peace—at least, that's what's being claimed although North Korea haven't outright said they are behind it.

After the initial leaks things turned increasingly nasty as the group threatened Sony's employees and then said they were going to conduct a 9/11-style attack on movie theaters that were showing the film, after its Christma Day release.

This caused the largest theater chains in North America to cancel the film which signaled the final blow. Yesterday Sony released a statement saying they were pulling the film entirely: "We are deeply saddened at this brazen effort to suppress the distribution of a movie, and in the process do damage to our company, our employees, and the American public. We stand by our filmmakers and their right to free expression and are extremely disappointed by this outcome."

Although this might now satisfy the Guardians of Peace and the North Korean political elite, actors and celebrities took to twitter to express their sadness at freedom of expression losing out to anonymous cyber threats. Take a look at what they've been saying. They're not a happy bunch.

I think it is disgraceful that these theaters are not showing The Interview. Will they pull any movie that gets an anonymous threat now?

Really hard to believe this is the response to a threat to freedom of expression here in America.#TheInterview

Wow. Everyone caved. The hackers won. An utter and complete victory for them. Wow.

Saw at JFK. Both of us have never seen or heard of anything like this. Hollywood has done Neville Chamberlain proud today.

#TheInterview Is that all it takes - an anonymous threat and the numbers 911 - to throw free expression under the bus? #PussyNation

OBAMA: "Americans should go to the movies." ABSOLUTELY RIGHT. I hope releases #TheInterviewMovie - we stand up in this Country

We do not negotiate with terrorists. We just do exactly what they say.

While I understand the necessity to pull The Interview, it makes me furious. Free speech is the most admirable tenet in our constitution.

Canceling "The Interview" seems like a pretty horrible precedent to set.

Do the terrorists win in the end of #TheInterviewMovie ? I guess so..

. I agree wholeheartedly. An un-American act of cowardice that validates terrorist actions and sets a terrifying precedent.

America will NEVER give in to the demands of terrorists! (unless they don't like our movies in which case we will fold like a beach chair.)

So SONY fight back by canceling The Interview, thus proving to the hackers that hacking & threats work very well? That may prove an error.

All joking aside, we just gave a comfy foothold to censorship & it doesn't get any better from this point on. #TheInterview

And some politicians saw it as an opportunity for point-scoring.

. it wasn't the hackers who won, it was the terrorists and almost certainly the North Korean dictatorship, this was an act of war

Sony have no future release plans for the film. No doubt it'll get leaked online and become a massive cult hit though.