Oh dear. The one place you may have thought was safe from the prying advances of technology might be inside your own head. But no, because scientists have invented a machine that can effectively visualize your thoughts and put them on a screen for all to see.

“We can take someone’s memory—which is typically something internal and private—and we can pull it out from their brains.” Neuroscientist Brice Kuhl told Vox.

Kuhl and his team at the University of Oregon used 23 volunteers, an fMRI machine, and some machine learning software to conduct an experiment which used AI to reconstruct human faces by reading people's neural activity.

The scientists created a set of a 1,000 color photos featuring random human faces. They then showed these to their volunteers while they were attached to the fMRI machine. The fMRI machine detects blood flow to the brain which is an indicator of neurological activity.

The fMRI machine also has an artificial intelligence program hooked up to it. This reads patterns of brain activity and also gets mathematical descriptions of each face the volunteers were viewing. To help the AI analyse the faces the researchers used 300 numbers for various physical attributes.

Initially they ran a training exercise so the AI could learn what brain activity correlated with certain facial features. Then they hooked up the AI to the fMRI machine only and it had to guess or reconstruct the faces going on the participants' brain activity alone.

Below are some of the results it came up with. The top row is the actual faces and the next two rows were the AI, based on activity from different regions of the volunteers' brains. One is the ANG region, the angular gyrus, which is associated with vivid memories. The other is the OTC region, the occipitotemporal cortex, which is used for visual processing. 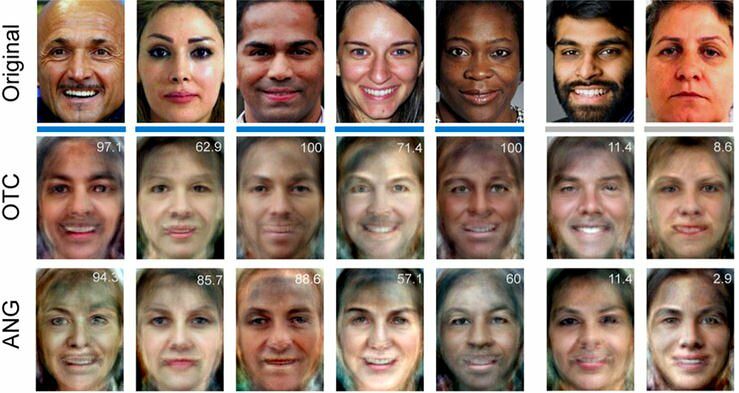 As you can see, they're not exactly spot on but this is very early days. Give it a another decade and who knows what the machines will be able to do by reading out brain activity.

Also, as Kuhl tells Vox the experiment wasn't done because they wanted to read people's minds but because they want to understand better how the human mind works. The scientists involved are now looking to do a new study to further investigate facial reconstruction based on memory.

Kuhl and his team published their full findings in the Journal of Neuroscience here.