The OceanMaker is a short film by animator Lucas Martell set in a world where water is scarce, so scarce in that the only remaining source of this essential liquid for human survival is in the clouds. Think 'Waterworld', but in the sky.

Rivers and lakes have dried up, and to make matters worse, vicious pirates come to poach what little clouds remain—but one female pilot won't stand for it, and is fighting back against their skullduggery.

I'm thinking that anyone living in California watching this might be taking down notes for drastic action if the drought continues there?

Lucas Martell, the creator of the film explains, "From a visual standpoint, we're steering away from the air pirates often found in steampunk and going straight-up "Mad Max" in the sky. The film is packed with old, beat-up planes that have been cobbled together from spare parts found in airplane graveyards."

What's also interesting is how it was made, as Martell points out, "The bulk of the film was made using nothing but laptops during a 7-week artist retreat on a small caribbean island."

The OceanMaker is impressively produced and was one of the official selection of the Texas Shorts at SXSW 2015. It's definitely worth a look. 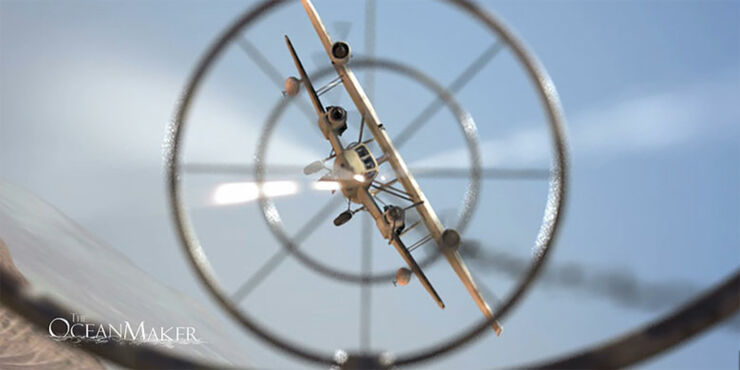 The film is now available for free at oceanmaker.com, but purchasing will unlock additional features, including the commentary tracks, a music-only version, and the ability to download a DRM-free copy of the film.

Meet the team below: