It's time to be really honest with yourself before you get comfortable and watch this, are you scientifically illiterate? Do you even know what that means? Then you could probably do with sitting down and absorbing all parts of The Feynman Series, but if you’ve got too many cat videos to watch, then just make do with Part 4.

It's time for some 'Science Biatch!'and if you’re wondering who the f#ck Richard Feynman is, he was a physicist involved with the concept of quantum mechanics, one of the brains behind the creation of the atomic bomb and i'm guessing the only cat video he might have watched in his lifetime would have been made by Schrödinger. Wikipedia will explain the rest (but we'll list the important bits below to save you a mouse-click). 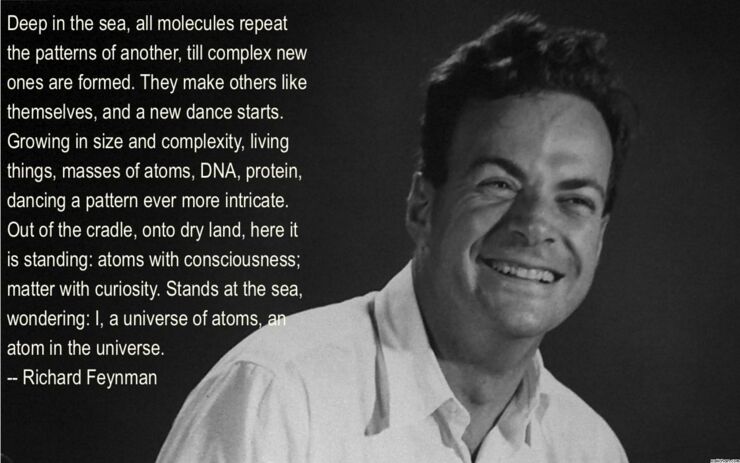 Background on Richard Feynman (Thx. Wikipedia):
Richard Phillips Feynman (/ˈfaɪnmən/; May 11, 1918 – February 15, 1988) was an American theoretical physicist known for his work in the path integral formulation of quantum mechanics, the theory of quantum electrodynamics, and the physics of the superfluidity of supercooled liquid helium, as well as in particle physics (he proposed the parton model). For his contributions to the development of quantum electrodynamics, Feynman, jointly with Julian Schwinger and Sin-Itiro Tomonaga, received the Nobel Prize in Physics in 1965. He developed a widely used pictorial representation scheme for the mathematical expressions governing the behavior of subatomic particles, which later became known as Feynman diagrams. During his lifetime, Feynman became one of the best-known scientists in the world. In a 1999 poll of 130 leading physicists worldwide by the British journal Physics World he was ranked as one of the ten greatest physicists of all time.

He assisted in the development of the atomic bomb during World War II and became known to a wide public in the 1980s as a member of the Rogers Commission, the panel that investigated the Space Shuttle Challenger disaster. In addition to his work in theoretical physics, Feynman has been credited with pioneering the field of quantum computing, and introducing the concept of nanotechnology. He held the Richard Chace Tolman professorship in theoretical physics at the California Institute of Technology.

If you have got this far and are still hungry for more then check uot the entire Feynman Series: