If there's one thing that cries out "DYSTOPIAN NIGHTMARE FUTURE" it's armed flying machines. It's the kind of oppressive technology that sci-fi has been using to fuel our collective fears for years. And now North Dakota has become the first state to legalise armed drones.

Thankfully they're not armed with machine guns but they can carry tasers, tear gas, rubber bullets, and other non lethal weapons, yet. Skynet anyone?

You can thank the passing of Bill 1328 for bringing flying weapons into the hands of the police. According to the The Daily Beast House Bill 1328, in a cruel twist, was actually planned to limit the police weaponizing drones altogether.

They reported that, "The bill’s stated intent was to require police to obtain a search warrant from a judge in order to use a drone to search for criminal evidence. In fact, the original draft of Representative Rick Becker’s bill would have banned all weapons on police drones."

But a law enforcement lobbyist, who's also cosy with the drone industry, got hold of it and the bill was passed limiting only lethal weapons. So non-lethal ones were fine—which still sucks. 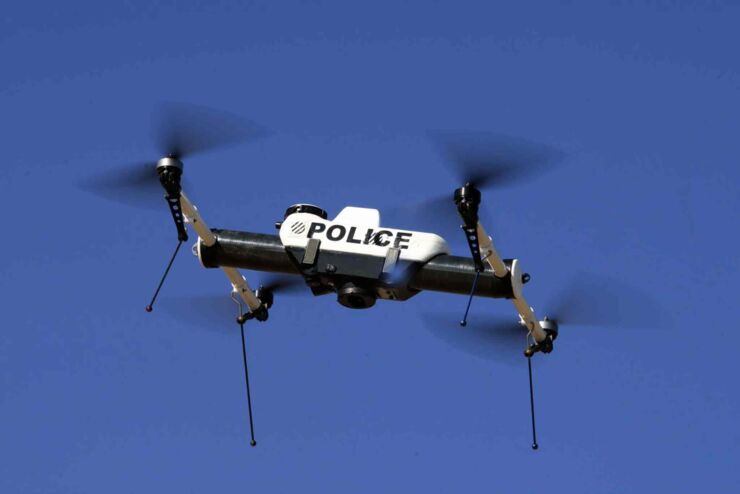 GARY FRIEDMAN / LOS ANGELES TIMES / MCT FILES. A drone is given a test flight in California in 2011.

It comes at a time when the militarization of the police has seen protests in Ferguson look like, again, something from dystopian sci-fi. So arming drones with tasers and tear gas isn't going to help the public/police relationship one bit.

It's just going to make people think "WTF? Armed drones? Are you kidding me?!"

Along with the police, civilians have also taken to arming drones. Back in July a video surfaced on YouTube (below) of a DIY customised drone with a semiautomatic handgun mounted on it.

So when civil unrest causes the collapse of society the resulting war will be fought in the skies as well as on land. Oh goody. We truly are living in a terrifying future.