It won't take you long on YouTube to find those "dinosaurs never existed" videos, but don't let palaeontologist Trevor Valle see you searching. He appeared on the Joe Rogan Experience podcast last year and unleashed some of his thoughts on the people who claim dinos never walked the earth.

And Trevor Valle knows his stuff, being a former Assistant Lab Supervisor from the La Brea Tar Pits based in Los Angeles. He's also appeared and hosted science shows and docs, studied all kinds of fossils from mammoths to dinosaurs and even performed a necropsy on a 10,000 year old woolly mammoth which had blood and muscle tissue that had been preserved in the Siberian ice.

So, yeah, he knows the history of the planet and he's not going to take any crap from flat earthers or dino-deniers about their crazy theories, OK? In the podcast Rogan plays Trevor Valle a video by flat earth supremo Eric Dubay. Dubay wrote The Flat Earth Conspiracy book and the video Valle watches and fumes over is taken from that. It's titled "Dinosaurs Never Existed!" and as Rogan plays it to Valle, Valle takes up each point put forward by Dubay, and then debunks it into next week.

He does so while throwing off the odd casual swear word too, because idiocy makes him mad. And it's great to watch, immensely satisfying and you should play it to anyone you know who thinks either a) dinosaurs never existed or b) thinks the earth is flat or c) thinks Eric Dubay's ideas are worth anything more than ridicule. 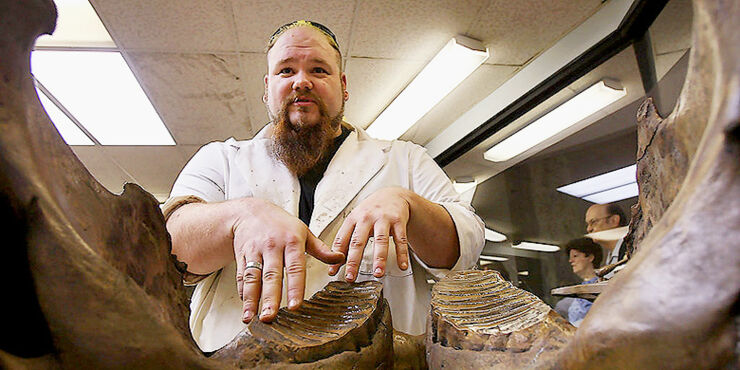 Trevor Valle with a mammoth fossil find under LA store

It's not the first (and no doubt won't be the last) time Trevor Valle defends the giant reptiles that once ruled the earth. He once took aim at pop star Kesha on Twitter for desecrating a triceratops skull he'd lovingly cleaned. The Kesha dinosaur incident happened at Los Angeles' Natural History Museum.

“[S]uck it,” Kesha had posted on social media. “I’m standing on the dinosaur bitches.” Well, that was more than Trevor Valle could take, he'd been the person who had meticulously cleaned triceratops right side of the skull—and so the Kesha twitter flame war had begun. Valle took aim at Kesha and her fanbase took aim at Valle.

2) A personal reason... I cleaned that skull. So, I say this from the bottom of my paleontologist heart... #SuckItKesha, you fucking reject.

So, basically, don't mess with Trevor Valle. Especially if you deny the existence of dinosaurs. Or if you're Kesha. 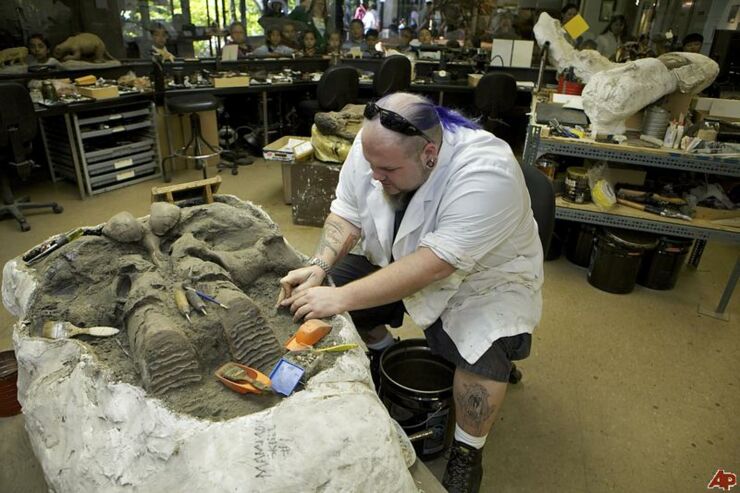 Trevor Valle working on some fossils