A dangerous new social media game called 'Blue Whale' is being linked to Russian teens committing suicide and is currently being investigated by police to see if there is any connection to this online game.

The Siberian Times reports that Yulia Konstantinova, 15, and Veronika Volkova, 16, fell to their deaths from a 14 storey apartment block roof in Ust-Ilimsk, Irkutsk region. Other incidences thought to be related to the bizarre 'Blue Whale' game include a 14 year old girl from Chita who died from throwing herself under a commuter train, while a fourth girl was injured critically when she fell to the ground from a fifth floor flat.

State investigators are looking into links to the 'Blue Whale' suicide game, with one of the Russian teens having posted a picture of a blue whale on social media before possibly committing suicide.

At the double suicide in Ust-Ilimsk two Russian teens, boys, were detained by police for filming the incident. While in another case a headteacher tipped off police after he was notified that a student had joined a suicide group, thankfully her death was prevented because of this. the 'Blue Whale' game seems to be the common connection.

What Pushes These Teens Into Committing Suicide?

The Blue Whale that some Russian teens are alleged to have posted to social media Vkontakte.

This is how the game ‘Blue Whale’ game works, After signing up to one of the virtual groups on the VKontakte social network teenagers are asked to complete self0-harming tasks cutting themselves and carving words or symbols into their arms. They are then told to post their results on the social media group page.

This continues over a period of 49 days to the final build-up where they are being told to kill themselves on day 50th day of being involved in the game. It is at this point that some teens are committing suicide.

The Daily Mail reports "They are also urged to watch horror movies all day, and to wake themselves at 4.20am, steps leading up to demands to take their own lives on the 50th day of being in the game. There was deep concern last year when there were fears that the sinister masterminds could be behind at least 139 suicides across Russia."

Is The Blue Whale Game Responsible For Suicides?

Russian website RBTH reports, “According to the investigators, from December 2013 to May 2016, the perpetrators established eight virtual groups on the VKontakte social network to promote suicidal behavior and driving underage users to committing suicide.”

Elsewhere on the internet investigative newspaper website Novaya Gazeta reported last year "Almost all these children were members of the same internet groups and lived in good, happy families. We know absolutely for sure is that adults are working with children, with the help of knowledge of their habits and passions, using their favourite language and culture,' reported the newspaper."

It continued "They know psychology well, they convince girls that they are 'fat', tell boys that they are 'losers' in this world. And that there is another world and they will be among the chosen." 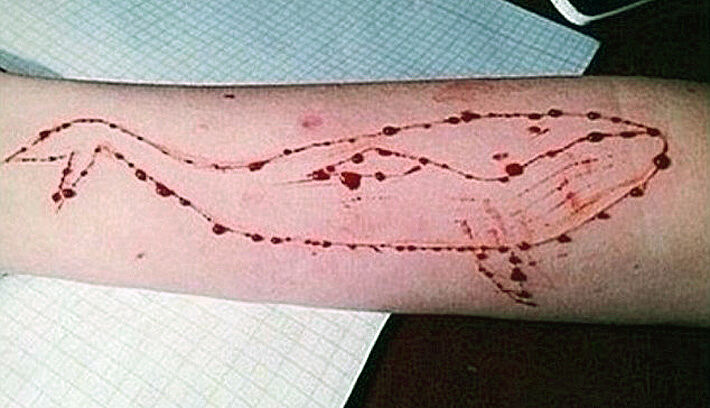 Teenagers are urged to use a knife to make the shape of a whale on their bodies.

Here's a report on two of the cases from The Siberian Times:

The police identified the girl who explained that she had joined a 'game' in social media network 'Vkontakte', and had been given 'tasks' by the administrator of the group.

She was told to cut certain words on her hands and search for a high-rise building, from which she could jump. She rejected the demands, but others appear to have obeyed them.

In the Chita case, transport police confirmed that the so-called suicide game 'Blue Whale' is seen as a possible 'cause of death'. A second girl had made plans of committing suicide with the dead teenager, but changed her mind at the last moment, it was reported.

It is claimed teenagers are urged to use a knife to make the shape of a whale on their wrist or leg, say Russian reports.

They are also urged to watch horror movies all day, and to wake themselves at 4.20 am, all steps leading up to demands to take their own lives on the 50th day being in the game.

There was concern last year when there were fears that the sinister masterminds could be behind at least 130 suicides across Russia.

After the arrest of a supposed ringleader named as Phillip Budeikin, 21, there was a reduction in cases, but now there is major new concern of vulnerable teenagers being swayed by the barbaric death accounts.

If you are in crisis or thinking of committing suicide and need someone to talk to call the Samaritans branch in your area or 1 (800) 273-TALK, visit a local Samaritans branch or samaritansusa.org for details.