Coffee makes the world go round, most of us drink it daily and without it we'd probably never get any work done. And if you live in Spokane in Washington State you have the opportunity of getting your cup of joe served up by a topless barista. They have proved so popular that five have opened up locally in the last year.

Chains of coffee stands (locally called 'sexpresso' bars) have opened over the city using baristas wearing bikinis and bare-breasted with just pasties covering their modesty. You can also get coffee served by topless men in their underpants too, meaning customers get an eyeful along with their caffeine fix.

Restaurant guide Zagat take a look at the coffee stands that have sprung up using these topless baristas, and the controversy they're causing. Because while some customers love the idea, it's causing a bit of upset with other residents who don't want so much flesh on show when they pull up to get a coffee.

On the one side the people running these stands are using the flesh angle to get one up on the big coffee chains like Starbucks and win customers. It also means big tips for the baristas which is good for them and their families.

But, as one woman says in the video, there's the whole "won't somebody please think of the children!" argument. You could say, well, don't take your kids there, but the stands don't have signs stating the baristas aren't clothed.

Zagat take a look at both sides, neither of which looks like it'll be backing down any time soon. 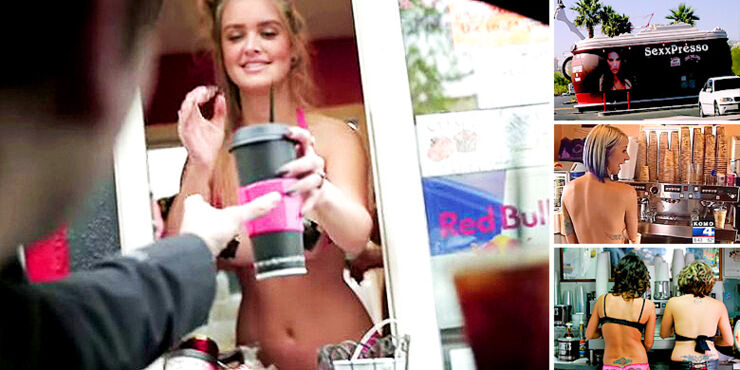