Carols, Santa's grotto, a Christmas market, those are the kinds of festive activities everyone likes to do at this time of year. All that and more is on offer in the historic town of Shrewsbury, UK. The town, situated on the River Severn, dates back to the early 10th century when it was a fortified Saxon settlement.

The center bears the hallmarks of its history too, with hundreds of listed buildings from timber frame Tudor to Georgian architecture lining the medieval streets. It's also home to Shrewsbury Castle, Shrewsbury Abbey, a Benedictine monastery founded in the 11th century, and beautiful Victorian gardens.

If you were looking for the perfect Christmas setting to celebrate the festive activities then you have come to the right place, they even have their own Facebook page to keep you abreast of what's going on.

The town was a major trading point throughout the Middle Ages, was the birthplace of Charles Darwin, and saw a famous battle, the Battle of Shrewsbury, fought just north of the town centre between King Henry IV and a rebel army led by Henry "Harry Hotspur" Percy. It was immortalised in William Shakespeare's Henry IV, Part 1 and also features in Orson Welles' movie Chimes at Midnight.

So there's a helluva lot of history to the place. As such it's an ideal destination to visit for some festive shopping, where you can soak up the Christmas lights, go ice-skating, and wander around the attractive town centre or take a stroll along the winding river.

Learn more about the town here. 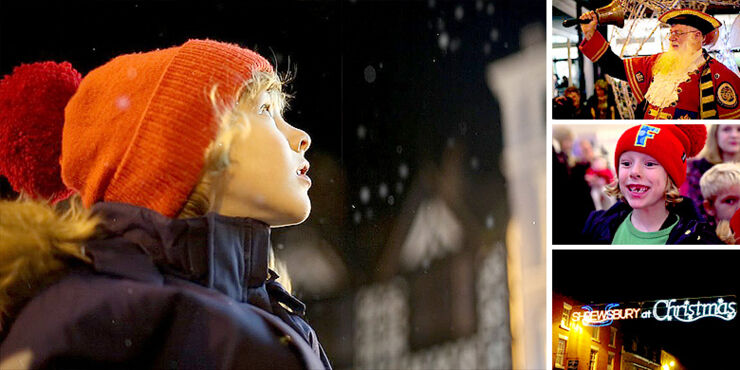