'If you go down to the web today, you're sure of a big surprise. If you chug down a Monster drink today, you'd better drink it in disguise. For every Christian conspiracist that ever there was will gather there for certain because today's the day the teddy bears have their picnic unbelievers will burn in hell for eternity.'

Conspiracies, conspiracies everywhere! But maybe this woman is worth listening to, she has such a great sales pitch on why the popular Monster Energy drink is the devil's brew that i'm nearly sold on her convincing evidence. Nearly. She's so good in fact that all she has to do now is connect it with Obama and she could run for office in 2016, the republicans would totally love her.

According to Dangerous Minds:

You might not have heard of a low IQ conspiracy theory that has become somewhat of an urban legend among some Christians: the notion that the Monster Energy logo looks like three Hebrew vavs—a letter which has the value of six in Hebrew numerology.

You hear that, Jimbob? Three sixes equals “the number of the Beast” in the Book of Revelations. Or else it equals, you know EIGHTEEN?

Monster Energy’s slogan is “Unleash the Beast.” OBVIOUSLY that must be the work of Satan himself (or if not the Prince of Lies, maybe a hip advertising agency in Portland?).

And that's the point here people, if you look at something long enough and really want to believe you see something subliminal hidden in a message, be it advertising, playing a vinyl record backwards, satanic messages in rap songs (or any early Britney Spears songs), or whatever the else comes to mind, the truth is you will probably find something that backs up your point of view. 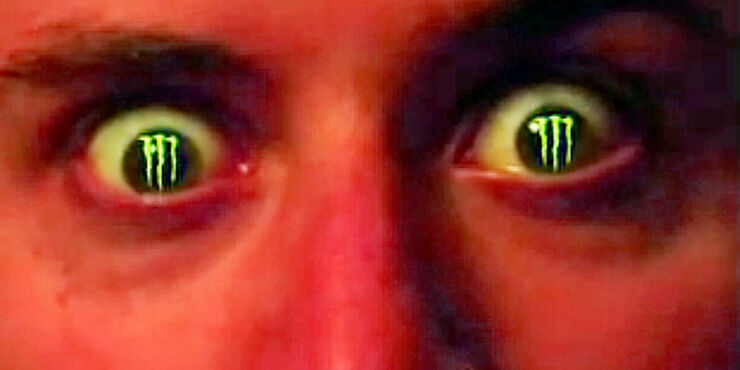 It's what you do with it next and how you convey it to other people that is the trick to creating a conspiracy theory that someone like David Icke would be proud of.

But just remember you are probably doing as much damage as good for your belief/cause in the process.

If all of this has left you feeling that Monster is indeed the work of Satan, i'd suggest you start drinking Red Bull. It gives you wings. Fact...*WAIT!?!