If you were looking for a new ringtone for your phone, then this frenetic but hugely enjoyable track from musician Marc Rebillet might be it. It's titled "10 THINGS YOU AND THE ILLUMINATI HAVE IN COMMON" (most of his tracks seem to have very long titles) and it features Rebillet wrapping like Donald Duck over a stomping beat.

It's hard not to get swept up in it all, because as soon as you press play on the video the almost tribal beat kicks in and Rebillet starts building the song in real-time on his loop/effects station, a BOSS RC-505—wailing into the mic, before breaking into his quack-style rap. It's all part of his improvisational technique.

Rebillet has an intriguing history outside of making catchy, manic music too. It seems he possibly found an unreleased Sufjan Stevens album called Stalker in a dumpster, posting about it to Reddit a few months ago.

Prior to that he found internet infamy around eight years ago for hilariously selling his number one spot in a queue for the new iPhone to a lady for $800.

But regardless of all that, his improvised music is a whole lot of fun.

If Beardyman and Reggie Watts ever got together and had a music love child, it would have to be be Rebillet. Have a listen to it above and check out his YouTube channel for more. 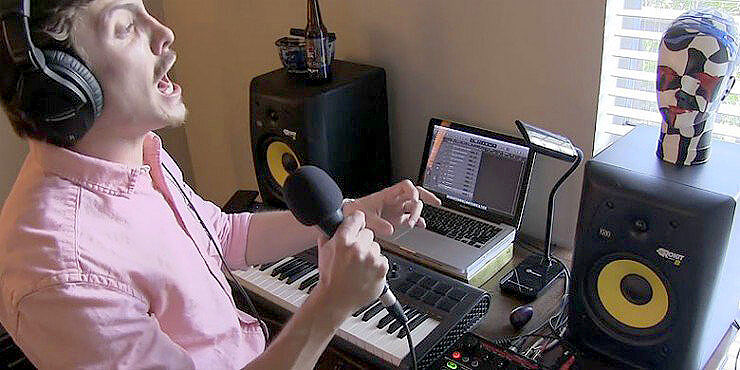