As part of their current promotion for the Sony Pictures Life movie, Ryan Reynolds and Jake Gyllenhaal gave an amusingly off beat interview with the entertainment reporter from Fox 5 News. The pair star together in the new sci-fi thriller directed by Daniel Espinosa about a team of scientists onboard the International Space Station.

They discover a new "rapidly evolving life form" that caused life on Mars to become extinct and now it threatens to do the same on earth. Trapped aboard the ISS with the rapidly-growing organism, the crew must find out how to kill it before it manages to escape and decimate Earth. The film is due for release on March 24, 2017.

But that's not something you would ever find out about the Life movie from the hilariously NSFW interview that Ryan Reynolds and Jake Gyllenhaal give here. It all starts to descend when the interviewer hands them a little Deadpool clip each as a little memento. But Gyllenhaal then proceeds to throw his over his shoulder.

The Life Movie Interview Goes Off The Rails 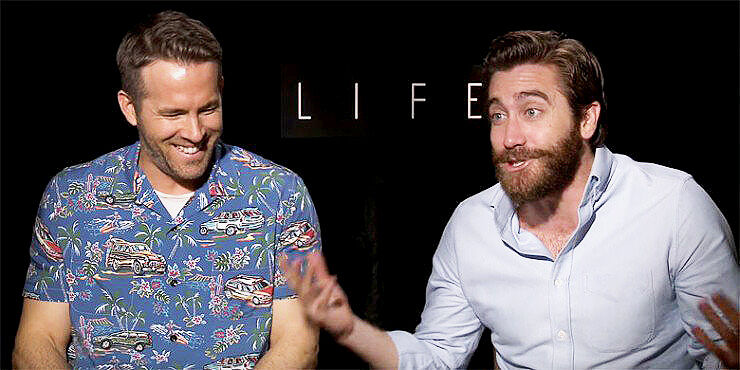 The pair then begin laughing uncontrollably at this and Gyllenhaal gets out of his chair to go pick it up. Meanwhile the reporter is trying to claw back some control, which he attempts to do by asking them about tracking shots. As press junkets go, plugging the new Life movie interview is going downhill fast.

But then Reynolds replies with "I love big one-ers" in reference to one take shots—and that's it. Both Ryan Reynolds and Jake Gyllenhaal can't let a phrase with such innuendo pass without making jokes about "big one-ers," their wives and giggling like a couple of school kids.

As this continues the reporter gets no closer to getting an answer to his question, which isn't great for him. Or to finding out about anything regarding their upcoming movie. But for the rest of us, it makes for one of the most entertaining interviews in a long time. In fact, they should make a film about it and call it 'Interview Life Movie'.

It's proof of two things really, one that Ryan Reynolds and Jake Gyllenhaal are no doubt great friends in real-life, and probably had a helluva time on the set of the Life movie. And secondly, that this was probably the end of a long day of filming press interviews and the two were quite delirious by the time they got to this one.

In case you are wondering what kind of film Life movie is and if it actually exists here's the trailer below: