If you've seen The Revenant you'll know it's a film that doesn't shy away from violence, quite the opposite, it seems to embrace. Even if you haven't seen it, you will probably have heard about some of the gruesome exploits that Oscar-hungry Leo endures in the name of his craft.

Which is why this sketch from Above Average works so brilliantly. Because it has happy hippy painter and TV host Bob Ross (RIP), played by Frank Garcia-Hejl, sitting down to paint a "tranquil little mountain scene." A tranquil little mountain scene that just so happens to feature in Alejandro González Iñárritu's Oscar-nominated film about the frontiersmen of the American West.

Which means that just as Ross begins to paint, the serene scene is interrupted by some fur tradesmen, which he also begins to paint. "Why not?" He reasons but before long his gentle, reassuring manner is tested to its limits as mother nature presents Ross with a bear. A very angry and violent beat. Oh Hell. Hell no.

What we're treated to is Ross' increasingly horrified, but steadfast, reactions to the brutal horrors put forth by the film, juxtaposed with his calm and serene tone as people get buried alive, horses are shot dead, and men are violently attacked with arrows.

"Let's put a happy little arrow through this guy's throat." he says, just trying to endure.

Let's just say the color red gets a lot of use. 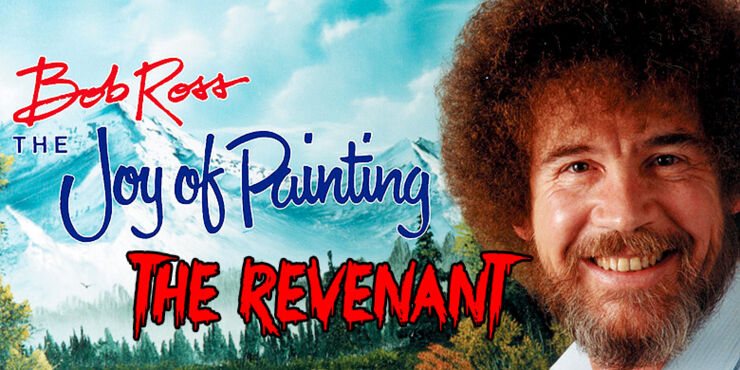