We've all got drunken stories we can recount, stories we can now look back on and laugh or cry or be reminded of every time we look in the mirror and see the physical scars. Shia LaBeouf's got one that will have you in fits of laughter, as he relates the epic saga that led to his arrest in June outside the Broadway musical Cabaret.

LaBeouf is only too happy to oblige host Jimmy Kimmel when he asks what the heck happened regarding his arrest, and goes into full detail about what was involved. Whiskey was involved, of course. And plenty of it. LaBeouf recalls how he'd just landed in New York after visiting his girlfriend in Ireland, "When you go to Rome, you have spaghetti. In Ireland, you drink whiskey." he notes. "I come back, I land, and it's the World Cup. You drink a lot of Whiskey during the World Cup, it seems. It makes it all fun." Yup.

So basically he's at a bar knocking back whiskey watching a game on the TV. Then, he goes outside for a cigarette and starts speaking to a homeless marine.

This seems to be the catalyst, along with the steady stream of whiskey, for an incredible, and hilarious, series of events. Which involved chasing the homeless guy, getting free tickets to Cabaret, hitting on two 50-year-old women (and feeding one of them strawberries), slapping Alan Cummings on the butt, getting arrested, ripping his shirt off, spitting on a cop's shoe, getting put in a Hannibal Lecter mask and finally, like all the best drunken night's out, ending with a McDonald's egg sandwich.

Hey, we've all been there. 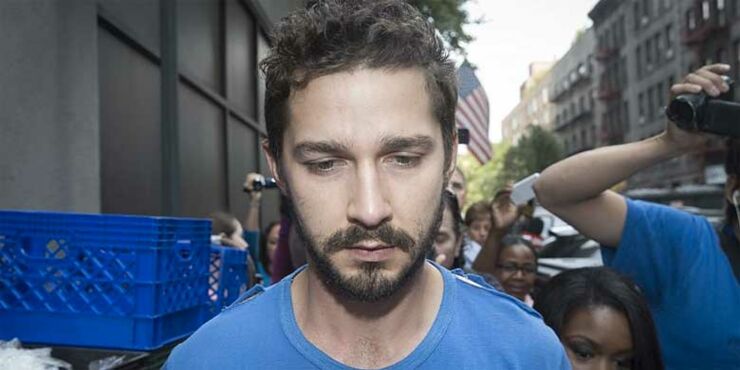