So by now we've all heard and read about Apple's new iPhones and watch. Basically it means Apple now own your phone, your wrist and your wallet.

Thankfully though Twitter was on hand to give its much needed opinion on the new devices, pooling the hivemind to give some real insight into the brand's latest crop of tech, i.e. it ridiculed it. It's the same way the iPad went, we'll mock it now but within the year will be scratching each other's eyes out to get our hands on an Apple Watch.

The event started off not ideally, as there were problems with the live stream which buckled under the amount of people tuning into events at Cupertino. The video would disappear then reappear with Chinese dubs or people were greeted with a test pattern page. Twitter quickly picked up on this, with even Denny's making fun of Apple.

Weddings in Game of Thrones #thingsbetterthanapplelive

Once things settled down the excitement was palpable, even pets were looking forward to Apple's announcements, although sadly they would've been disappointed.

Darwin bummed there is no Apple dog collar forthcoming.

Then, as soon of news of the watch broke, the jokes came in thick and fast.

Perhaps the boldest part of Apple's announcement today was this new variation of the Watch.

So excited for the Apple Watch. For centuries, we’ve checked the time by looking at our phones. Having it on your wrist? Genius. #AppleLive

Tim Cook just said “it’s amazing what you can do from your wrist…” I agree, Tim, I so agree… #AppleEvent

I wasn't going to buy the Apple watch until I found out you can set it to African Time.

Sneak peak of the iwatch 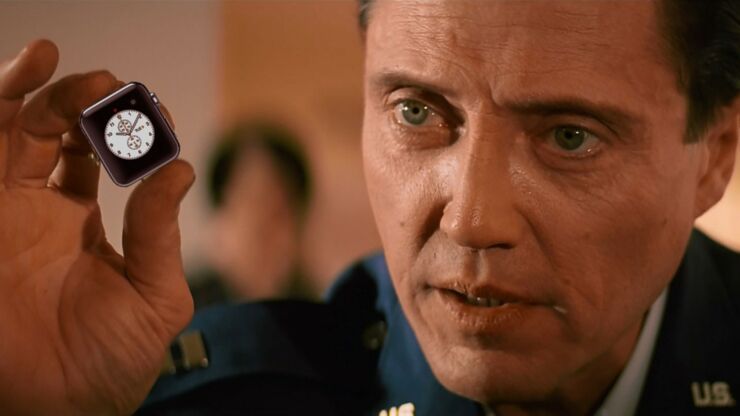 "Walken: 'Jony Ive carried this uncomfortable hunk of metal in his ass for 4 years.'
via

The new iPhones didn't get spared either.

I don’t know why anyone would want an iPhone 6. I’ve had the same phone for the last 10 years and it does everything.

"The bigger screen allows people further away to see that you have an iPhone. Never be mistaken for a poor person again."

A digital watch and a U2 album. It's like Christmas morning 1984.

Predictive text on the new iPhone is actually pretty awfuTHIS PRODUCT IS AMAZING AND APPLE IS PERFECT. ALL HAIL APPLE.

I wish the new iPhone 6 had a feature that would slap the shit out of anyone who scrolls through someone's pictures without asking.

Your phone is tiny. Your wallet is obsolete. Your watch is an artifact. Now comes the long dark night of your technological discontent.

In case you missed it, here are the new iPhone features again (done for )

There was also a hilarious #iPhone6Questions hashtag where people posted mock questions.

At what temperature will it boil? #iphone6questions

Is it bigger or smaller than a seagull? #iphone6questions

Will it make my father proud of me? #iphone6questions

I'll make this quick because I'm tweeting from an iPhone, but will the battery lif #iphone6questions

Can I use it to communicate with the dead #iphone6questions

Will it ripen fruit #iphone6questions

Will it fill the void #iphone6questions

Will it explain to me why she left? #iphone6questions

And, finally, the question that's on every Apple fan's lips...