It seems every other month scientists have discovered a strange signal or anomaly in space they can't explain which is then attributed to aliens. In fairness to the scientists, they usually state aliens as one of many possibilities they're looking into—because it could always maybe be aliens—and the media jumps on it because aliens make good headlines and "rotational transitions in molecules" doesn't.

Anyway, the newest instance of this involves astronomers Ermanno Borra and Eric Trottier from Quebec’s Université Laval. They analyzed 2.5 million stars in the Sloan Digital Sky Survey to see if they could "detect periodic spectral modulations" and published the results in the paper "Discovery of peculiar periodic spectral modulations in a small fraction of solar type stars."

They found that 234 were giving off a strange signal, which they rule out being due to the instruments they were using to measure the signals or due to an error in their analysis, because there was such a small fraction.

They then put forward what they think might be causing these anomalies. "We consider several possibilities, such as rotational transitions in molecules, rapid pulsations, Fourier transform of spectral lines and signals generated by Extraterrestrial Intelligence (ETI)."

That's right, aliens. They then go on to rule out most of the causes put forward, except the most exciting prospect—and consider that the signals, which correlate with a prediction made in another paper, are "light pulses generated by Extraterrestrial Intelligence to makes us aware of their existence." 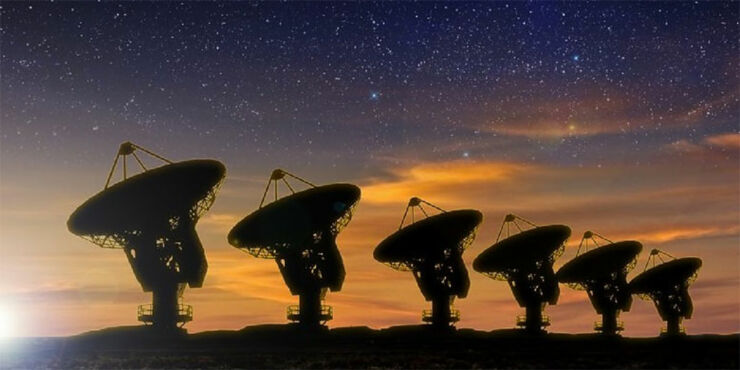 They say that the signals have the exact shape of an ETI signal that was predicted in a paper Borra published back in 2012. Back then Borra called the signal "highly speculative" but now seems to have found a possible example of it.

"The fact that they are only found in a very small fraction of stars within a narrow spectral range centered near the spectral type of the sun is also in agreement with the ETI hypothesis." the paper says. "However, at this stage, this hypothesis needs to be confirmed with further work. Although unlikely, there is also a possibility that the signals are due to highly peculiar chemical compositions in a small fraction of galactic halo stars."

Further work is now needed to be undertaken to further assess the signals, including confirmation of the signals using two or more independent telescopes.

Breakthrough Listen, a scientific research program set up by people including Stephen Hawking and Mark Zuckerberg, to look for evidence of alien life released a statement about the signals. See below:

It is too early to unequivocally attribute these purported signals to the activities of extraterrestrial civilizations. Internationally agreed-upon protocols for searches for evidence of advanced life beyond Earth (SETI) require candidates to be confirmed by independent groups using their own telescopes, and for all natural explanations to be exhausted before invoking extraterrestrial agents as an explanation. Careful work must be undertaken to determine false positive rates, to rule out natural and instrumental explanations, and most importantly, to confirm detections using two or more independent telescopes.

The UC Berkeley group use the most powerful SETI equipment, and have access to the largest telescopes on the planet, to look for evidence of extraterrestrial life.

They've also recently said they're going to use the Green Bank radio telescope to look at what's called Tabby’s star. The one that's been getting everyone excited because of speculation that it has an alien megastructure, a Dyson sphere, orbiting it. “I don’t think it’s very likely–a one in a billion chance or something like that—but nevertheless, we’re going to check it out,” said Dan Werthimer, chief scientist at Berkeley SETI.

Meanwhile the YouTube conspiracy theorists are all having a field day as the video below shows.