Bob Dylan isn't just a Nobel prize winning singer-songwriter, he's also an artist. In the sense that he's a painter and sculptor. Bill Clinton owns one of his metalworks. A new exhibition, The Beaten Path, of Dylan's art—sketches, paintings in acrylic and watercolors, ironworks—is currently on show at London's Halcyon Gallery.

The show has been in production for the last two years with the theme of the American landscape, and they are landscapes that are altogether Dylan. Spread across three floors and numbering a few hundred works, they explore Americana in major cities, in middle America, on the backroads, motels, places off the beaten track that the title references. They're places that the average person might see when walking down the street, or sitting on the bus staring out the window, or traveling home from work.

Interspersed are his welded iron sculptures and gates made by his Black Buffalo Ironworks studio. Being from Hibbing, Minnesota, Dylan says he's been welding iron all his life. Like the paintings they feature fragments from his travels, pieces picked up as he passes across the land. 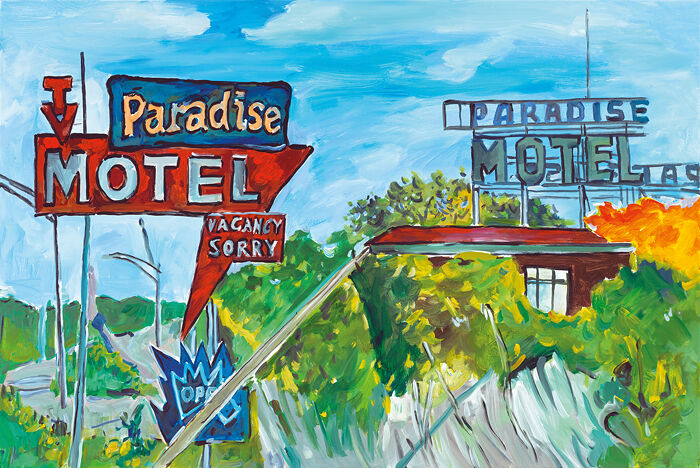 "For this series of paintings the idea was to create pictures that would not be misinterpreted or misunderstood by me or anybody else," Dylan writes in an essay he wrote for the exhibition, his most extensive prose writing since Chronicles. "When the Halcyon Gallery brought the idea of me doing American landscapes for an exhibition, all they had to do was say it once. And after a bit of clarification, I took it to heart and ran with it. The common theme of these works having something to do with the American landscape— how you see it while crisscrossing the land and seeing it for what it’s worth. Staying out of the mainstream and traveling the back roads, free born style." 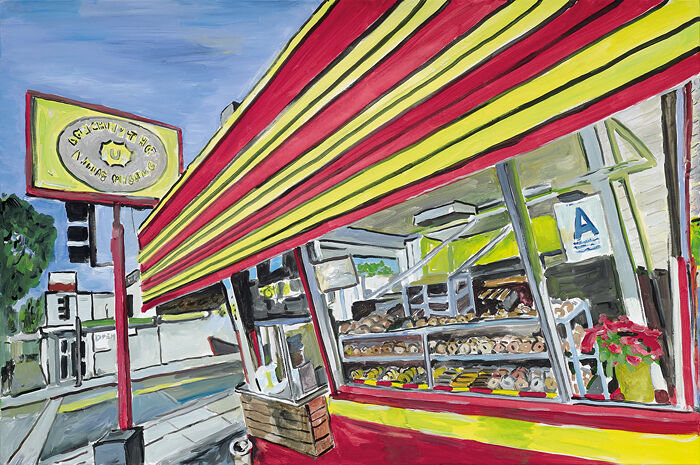 The resulting images are painted with a fondness and matter-of-factness, a naturalism Dylan calls it, while also likening their style to Wassily Kandinsky and Georges Rouault. "My idea was to keep things simple, only deal with what is externally visible." he writes. "These paintings are up to the moment realism—archaic, most static, but quivering in appearance. They contradict the modern world. However, that’s my doing." 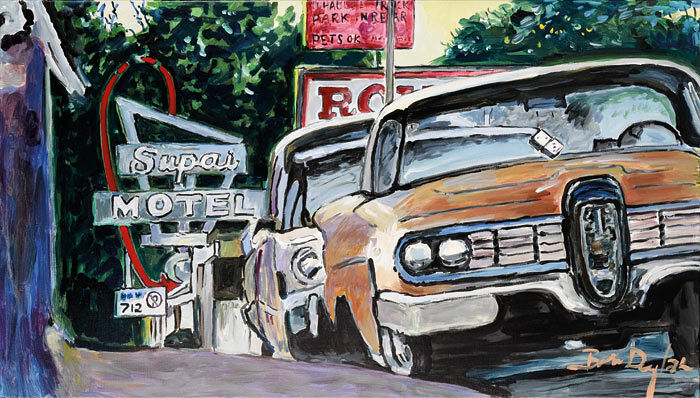 That contradiction means we get contemporary scenes but ones that evoke a sort of timeless America that exists beyond the modern one. Because the modern world of corporate buildings, highrises or "cold giant structures" and mass media doesn't appeal to Dylan, doesn't hold any meaning for him. So he ignores them, opting instead to see classical features in a hotdog stand or donut shop. "I restricted myself to traditional subject matter viewing nothing as shallow or gaudy," he says. "Whiplash curves, flying buttresses, pointed steeples, arches and waves." 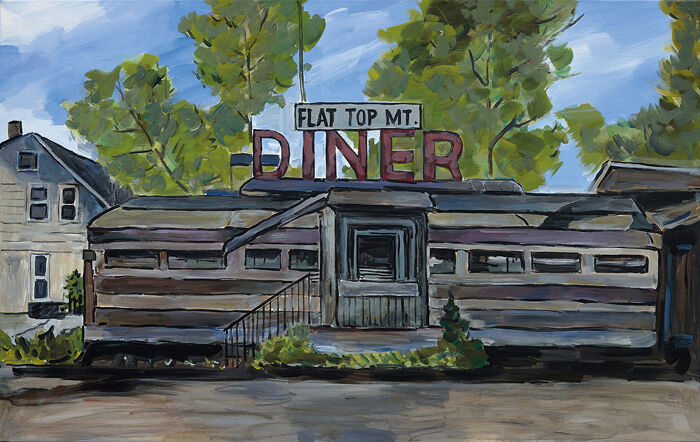 There are abandoned industrial sites, Texan boneyards, small farms and forgotten towns that Dylan has passed on his so-called Never-Ending Tour, which sees him play around 100 shows a year. "I don’t think anyone has travelled through America as much as Dylan," the gallery's marketing manager pondered. "And on his tour bus, he has very much been part of the American landscape himself for a number of years. I suppose this allows us to be taken on a journey with Dylan, what he sees.” 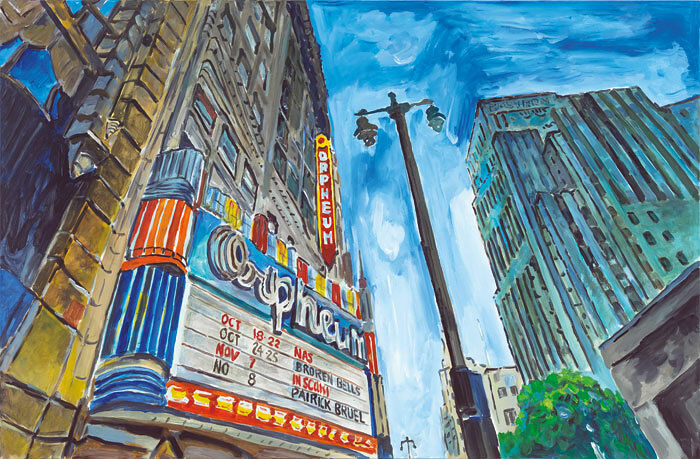 As for his technique, Dylan says when his hand fails his eye he uses the camera obscura method to help him capture some of the detail. Sometimes using a camera, other times using a convex TV screen found in old junk shops to view the world through. "In a lot of the other cases, all I needed was a straight edge, compass and a T-Square going on a case by case basis without abandoning tradition or adhering to any conventions or aesthetic doctrines," he notes.

There are scenes from his house in New Orleans. There are POV paintings of him looking up at the Manhattan Bridge in NYC. There are street scenes that Dylan has glimpsed while sitting in his hotel room. There's an image of a BBQ shack called Woody's, no doubt a nod to one of Dylan's musical heroes and the man he magpied the most in his youth, Woody Guthrie. There are Alabama side shows, railroad tracks, old cars. 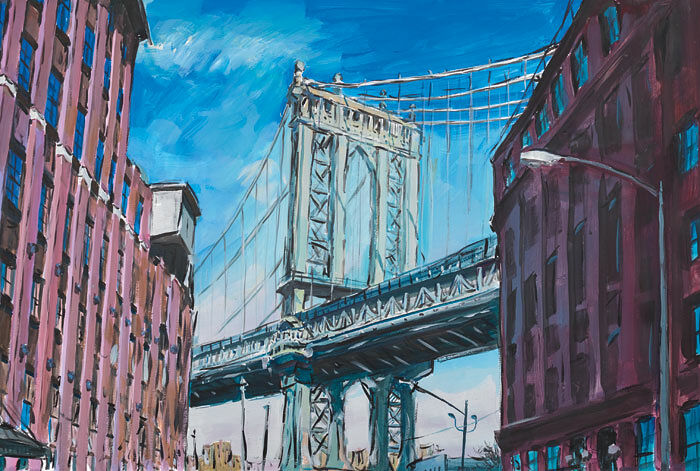 "There was a conscious attempt to dismiss consumer culture or popular culture, including mass media, commercial art, celebrities, consumer or product packaging, billboard signs, comic strips, magazine advertising," Dylan concludes in his essay. "The Beaten Path works represent a different subject matter from the everyday imagery of consumer culture. There is nothing to suggest these paintings were inspired by the writings of Sigmund Freud or that they were based on any mental images that occur in dreams, no fantasy worlds, religious mysticism or ambiguous subject matter. In every picture the viewer doesn’t have to wonder whether it’s an actual object or a delusional one. If the viewer visited where the picture actually existed, he or she would see the same thing. It is what unites us all."

You can read Dylan's full essay on the exhibition here. 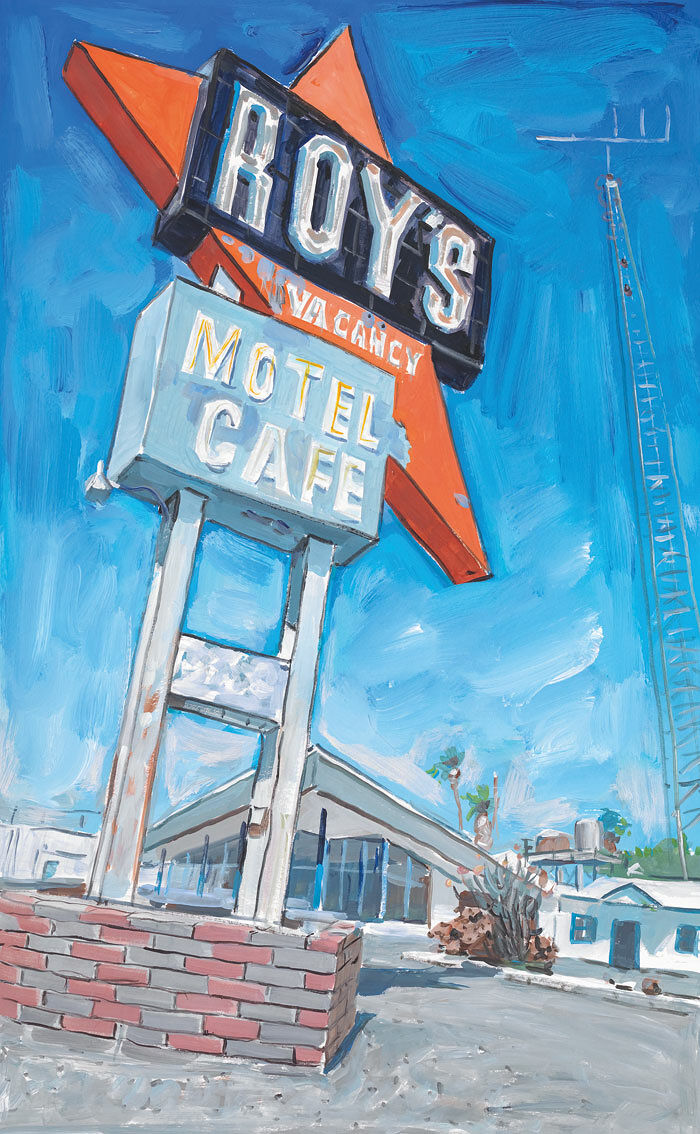 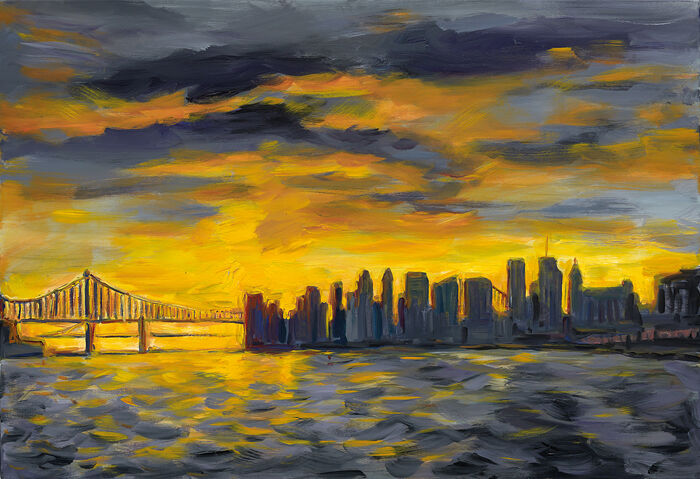 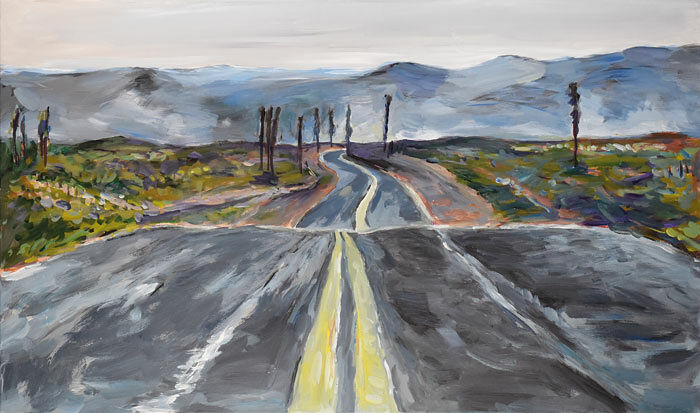