Often the simple pranks are the best ones and that goes for this ridiculous but entirely effective 'camel toe' prank. I say it's simple, but it does involve getting your hands on an actual live camel, which can't be that easy.

But once they've managed to accrue such a beast, these guys from YouTube channel whatever then take it onto the streets, hide it behind a blue sheet and wait for some women to walk past.

The result is a very immature prank, definitely, something that is way below your intellectual level, but you won't be able to help yourself chuckling away because it's undeniably funny.

As women stroll past, one of the guys says things like "Whoah your camel toe is HUGE." which causes the women to look down at their shorts and start correcting them. Until they turn around and see a camel.

Rather than being mortally offended by such an accusation, all the women seem to take it in good humor, laughing it off, no doubt impressed and slightly thrown off guard by a camel on the streets.

But hey, sometimes that's what it takes to make a viral prank video these days. 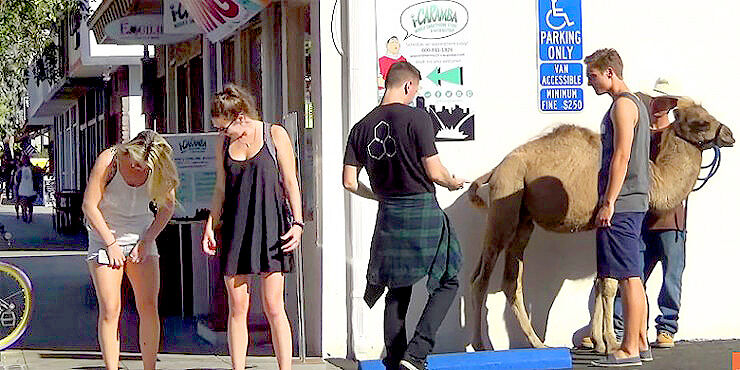