Rick Allen, the drummer from Def Leppard, famously played the drums with just one arm after he had the other amputated following a car crash. Drummer Jason Barnes suffered a similar fate when he lost the lower part of his right arm after he was electrocuted by 22,000 volts while cleaning a vent hood in a restaurant where he worked.

Although his arm was seriously damaged Barnes built a rudimentary drumming device that attached to it which meant he could still play. It also meant he was able to go to the Atlanta Institute of Music and Media in Georgia, and it was while there that he was introduced to Gil Weinberg from the Georgia Institute of Technology by drum instructor Eric Sanders.

Together they set about creating a robotic arm for Barnes, giving him his full drumming capabilities back, and even augmenting them with the precision of cutting edge robotics.

Weinberg is a specialist in building robots that can play music, so applying his skills to a human meant an exotic juxtaposition of man and machine. It also points to an interesting future for music, where musicians possibly augment their skills with robotic prosthetics.

For Barnes, the device needed to be able to take cues from the human body. The lab designed a prosthesis that uses a technique called electromyography to pick up on electrical signals in the upper arm muscles. By tensing his biceps, Barnes controls a small motor that changes how tightly the prosthetic arm grips the drumstick and how quickly it moves, vital skills for a drummer.

The researchers then added another layer of complexity: a second, autonomous drumstick on the robot arm (see photo). This second stick, controlled via its own motor, uses a microphone and an accelerometer to sense the rhythm Barnes is playing, as well as music from any nearby musicians. An algorithm then produces a new beat with a complementary rhythm and melody, modelled on the music of jazz greats like John Coltrane and Thelonious Monk.

With this extra artificial intelligence, human and machine combine to make Barnes a kind of “superhuman drummer”, Weinberg says.

It’s a common theme that runs through most of Weinberg’s work – the idea that robots can help us make music that wouldn’t be possible by humans alone. For example, software can crunch data much more quickly than we can, he says. It can also combine different musical styles in unexpected ways. 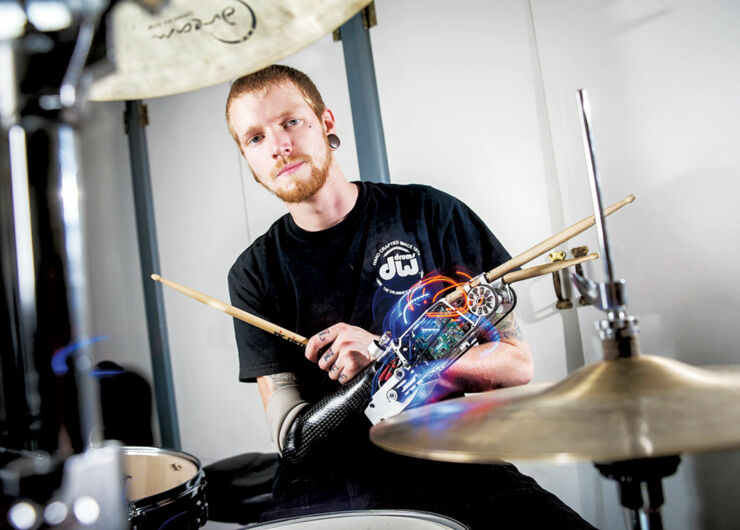