Ah, the World Cup. It's an opportunity to see the world's best soccer players on a global stage—and see major US air lines do dumb things on social media. Yep, I'm talking about you Delta Air Lines.

You were no doubt celebrating (like the people in the video above) John Brooks' awesome late goal in the USA vs. Ghana match that gave the US a victory. And in the excitement and heat of the moment you may've done something a little silly, like high-five the cat or or dry hump a stranger.

It's nothing to be ashamed of, even reporters were losing their cool. Just check out KGW's Drew Carney (below) who, like some kind of superpatriot, stripped off his jacket to reveal a very Merica! jumpsuit.

But let's get back to Delta, because their celebration involved tweeting a picture of the Statue of Liberty (fine, it's an iconic image that represents America) with a number "2" superimposed on it sitting next to a picture of a giraffe with a "1" on it to represent Ghana. 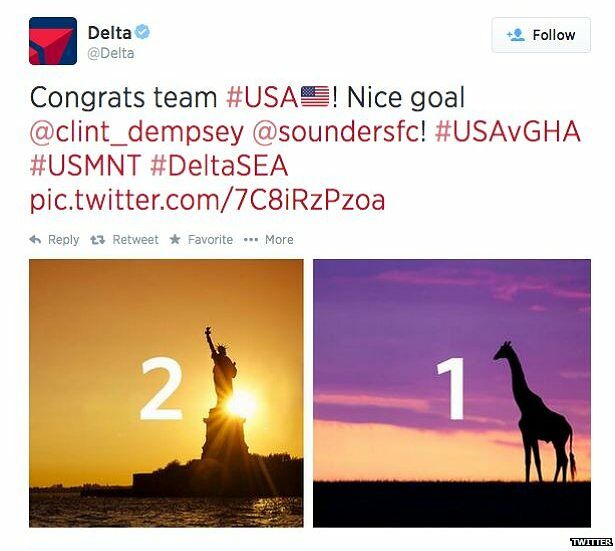 Except, there aren't any giraffes in Ghana—but those African countries are all the same, right? Erm, no. One Twitter sleuth even tracked down where the image came from.

That's KENYA, Delta. Not Ghana. The internet being an unforgiving place everyone rounded on Delta because, let's face it, tweeting a pic of a giraffe is pretty much them stereotyping Africa as one vast bush full of the same wild animals. So Delta apologised, but even that they managed to mess up. 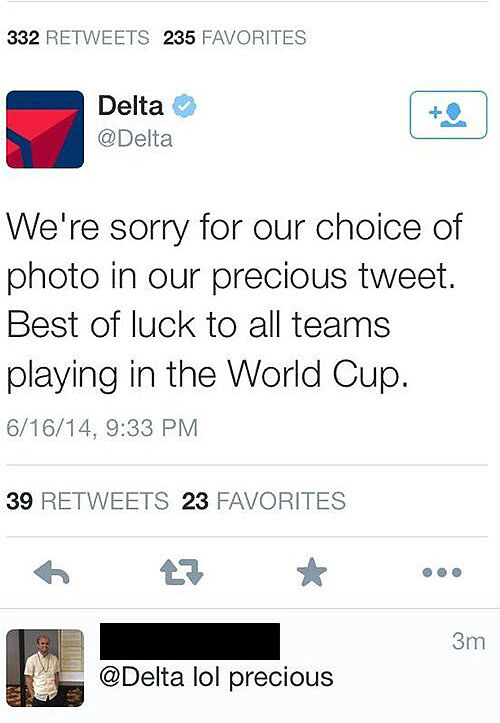 So they apologised again, this time spelling previous correctly.

We're sorry for our choice of photo in our previous tweet. Best of luck to all teams.

Not that it made any difference to outraged Twitter users.

From innocuous US air line to racist pigs in one afternoon—not bad going. So let's all take a lesson away from this and follow the advice of Aristotle, one of Ancient Greece's most esteemed philosophers, who noted "To avoid criticism say nothing, do nothing, be nothing, tweet nothing."