Some people just don't deserve to have animals as pets, and the way they mistreat them makes you wonder why or how they got to have the pet in the first place. The cruel owner of this dog is an example of such a person.

Jared Piper had seen this poor mutt chained up in a yard in Phoenix, Arizona where temperatures get very hot indeed for three years. He'd walked past the yard and seen the dog constantly chained up, never was anyone playing or showing him affection or was he running around free from his chain.

Then one day he stopped to talk to the dog and pet him. He then began to stop by each day to show him some love. It turns out the dog had been so badly neglected he had flies all over him and a tumor on his stomach. And he'd been chained up like that for 10 years.

After confronting the owner Jared took the dog with him, saving him from a life of neglect and pain, naming him Rusty Diamond, and taking him for his first ever walk.

You can almost see the joy in the dog's face and body language as he is introduced to new sights, sounds and smells as they walk through the neighborhood. It's an incredible moment.

Jared then took him to the vet, got him checked over, bathed him, and ultimately found him a new, loving, adopted home. What a nice guy. 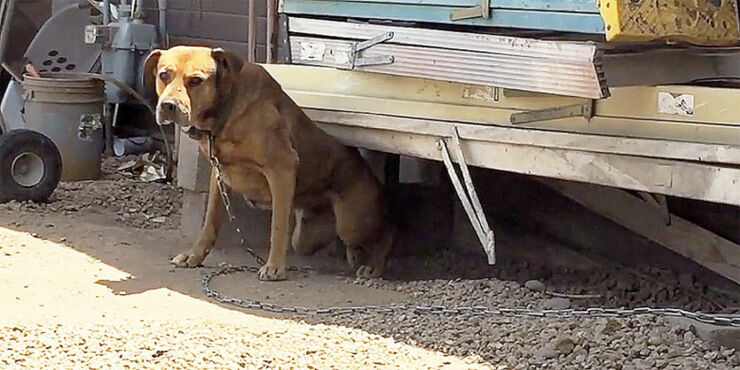