The Bulletin of Atomic Scientists, who know about this sort of thing, have moved the Doomsday Clock closer to midnight. The clock nows stands at three minutes to midnight—and counting.

According to them the world's the closest it's been to a human-wrought global catastrophe since the days of the Cold War more than 30 years ago—the reason, say the scientists, is due to global warming and nuclear weaponry.

I know what you're thinking: is it time to start making love with random strangers in the street yet? And the answer is: not quite yet. I think you have to wait until it actually arrives at midnight before you can get away with that.

The Bulletin of Atomic Scientists was founded in 1945 by scientists who helped develop the first atomic bombs in the Manhattan Project. In 1947 they created the Doomsday Clock as a way to visualise how close we are to a man-made apocalypse. 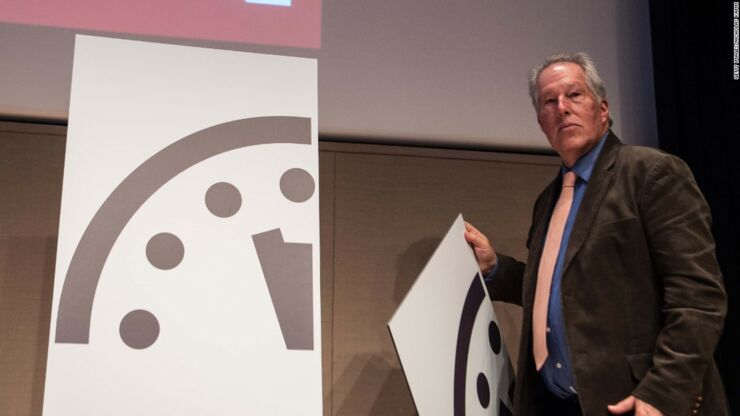 Although it's just a symbol, it's supposed to act as a warning that we need to act, so the scientists announce it with an open letter addressed to world leaders and the rest of us. And the world leaders are totally listening. Yeah, riiiight.

From: The Bulletin of the Atomic Scientists Science and Security Board

To: Leaders and citizens of the world

Re: It is only three minutes to midnight

In 2015, unchecked climate change, global nuclear weapons modernizations, and outsized nuclear weapons arsenals pose extraordinary and undeniable threats to the continued existence of humanity, and world leaders have failed to act with the speed or on the scale required to protect citizens from potential catastrophe. These failures of political leadership endanger every person on Earth.

And ends ominously with:

Last year, with the Doomsday Clock at five minutes to midnight, the members of the Science and Security Board concluded their assessment of the world security situation by writing: "We can manage our technology, or become victims of it. The choice is ours, and the Clock is ticking."

In 2015, with the Clock hand moved forward to three minutes to midnight, the board feels compelled to add, with a sense of great urgency: "The probability of global catastrophe is very high, and the actions needed to reduce the risks of disaster must be taken very soon.

Tell that to the climate change deniers.

Although ultimately futile, there is some soothing confirmation of world despair when the Doomsday Clock makes a move