As any fan will know the Game of Thrones deaths come along often and they come along brutally too. Since season one of the HBO fantasy drama premiered back in April 2011, there have been so many beheadings, butcherings, stabbings, slicings, bludgeonings, burnings, and other gruesome acts that you'll probably need a refresher. Especially since season seven is just around the corner, no doubt bringing with it plenty more Game of Thrones deaths, both of beloved, hated, and insignificant characters.

So, as a quick catchup without having to rewatch all six seasons, you can check out this hand drawn animation by Austrian artist Hannes Sommer (aka HansoArt). In only three-and-a-half minutes Sommer details all the Game of Thrones deaths, from Viserys Targaryen to Walder Frey, and beyond. Even finding time for the harrowing killing of Shireen Baratheon (while also having some humor with her death too). Which means reliving these can be both enjoyable (see Roose Bolton) and not so enjoyable (see the aforementioned Shireen Baratheon).

How HansoArt Drew The Game Of Thrones Deaths 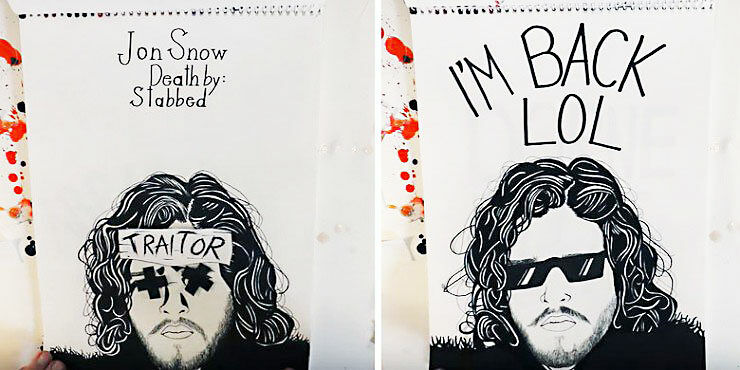 It's also not only impressive that Sommer can do all this in such a short time, but it's the way he does it in such a highly entertaining way too. His animation method involves getting physical and destructive as he rips and tears pages, splats ink and water on them, even sets pages alight in order to illustrate the cause of death of the various Targaryens, Lannisters, Dothraki, and Baratheons. And that physicality perfectly resonates with the visceral and violent nature of the show too—especially this aspect of it, the Game of Thrones deaths.

On his YouTube page Sommers confirms that all the characters were hand drawn by him, along with estimating that, in total, the whole project probably took him a staggering 150 hours to do. Which is more than double the time it would take you to watch all 60 hours of the series itself.

So that's even more reason to take a few minutes out of your day, and relive all the Game of Thrones deaths, no matter how traumatic it might be to even partially remember the horrors of the Red Wedding.

You can check out more of Sommer's art on his Instagram page.