You've been with your significant other for ten long, treasured years. Getting them some last minute flowers on your way home from work isn't going to cut it this time, so what do you do? Well if you're this guy you go all out.

For his 10th wedding anniversary he went next level, made a surprise proposal to his wife and put on an entire surprise wedding ceremony even though they're already married (is that even legal?).

Complete with a 75-piece marching band, a choir, family and friends, and their two daughters carrying a sign that reads: "Will you marry me... again?"

What ensues will get some of you (probably the female contingent) reaching for the Kleenex and weeping tears of joy that love can stand the test of time (and secretly hoping it might happen to them one day).

But fair play to the husband, it's a helluva lot of effort, just as long as he knows that every guy who's watching this with his wife hates him for raising the bar so high.

Happy tenth anniversary guys! Let's hope they make it to the eleventh. 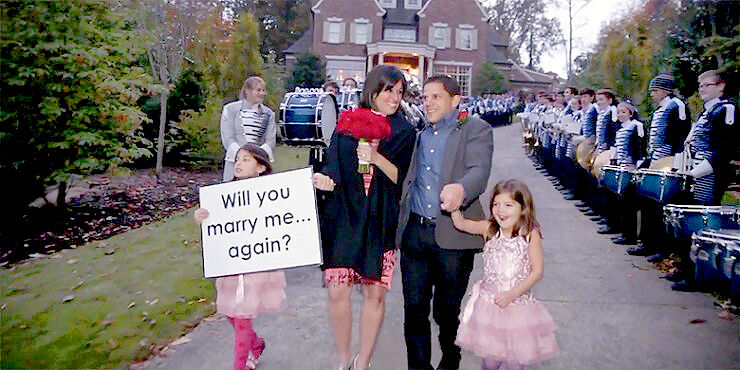