There are two things that are inevitable (after death and taxes) - 1/ It's a fact of nature that someone, somewhere is going to be having a bad day - and 2/ It's pretty clear by now that one of the best things about corporations joining twitter is when they mess up.

The link was obviously deleted quite promptly but not before the damage was done and it was screengrabbed (and of course posted) by a helpful web user (thx whoever you are buddy!). 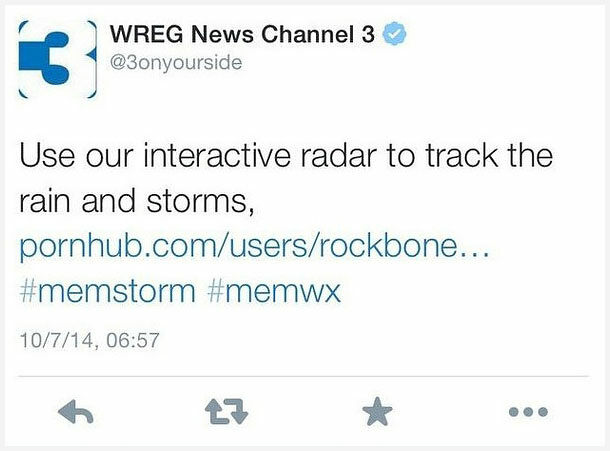 The Pornhib link was for a user called Rockbone (or maybe Rockboner?), so naturally Twitter started a #rockbone hashtag to ridicule the news station and their blunder, who seemed to blame the error on hackers. Because of course they did.

Have you you changed your passwords recently? Take it from us... Do it now. Also, resist public WiFi. For real...

They tried to crawl back some cred by tweeting a link to a charity and asking users to donate. But it was too late.

Since we have your attention today... Consider clicking this link and doing some good :)

Hey I hear you're a fan!

@kjmeow we once got hit with a category 3 rockbone. the clean-up is a nightmare

We found something something on your radar there. #Rockbone