Taking its cues from all those classic World War II war films we have come to know and love, the battlefield is chaotic with explosions and the injured, men lying defeated on the floor, covered in plastic darts.

There are shotguns, rifles, even a giant Nerf tank that looms over the hill to cause panic among the soldiers, blasting them out of the way. The attention to deatail is pretty much perfect, but minus the blood and the guts.

It's basically realised with the thrills and cinematic stylings of a war movie‚ and the sounds of guns loading and firing too—it's just the guns are of the Nerf variety.

As such it makes for a thrilling and hilarious watch, as the seriousness of war is strangely set against colored foam bullets and brightly-hued plastic guns, where death is everywhere and plastic rains from the sky.

But can these brave band of soldiers dodge the spongey bullets and explosions and win the day?

One day (hopefully) all wars will be fought this way.

But all warfare is filled with tragedy and loss, and as one Youtube commenter noted, "The real question here is whose poor Mom is gonna have to go pick up all those darts." 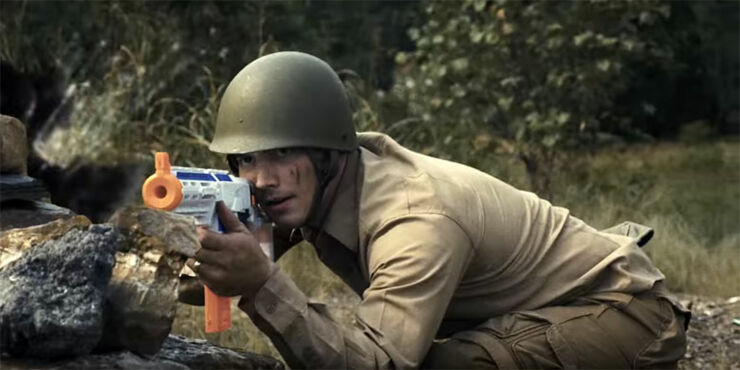