We've all seen rap battles, and are familiar with breakdance and Bboy dance-offs, they all have their roots in the passages of time from origins such as the gangs from West Side Story getting ready to rumble with each other.

All with songs and music of course.

But has anyone ever witnessed a drum battle between soldiers from different countries, going head to head with each other and fighting for the honor of their regiment.

The US Marines must get pretty bored stationed out in South Korea, but it looks like they've found some activities to pass the time. Namely, their band doing battle with the Republic Of Korea (ROK) in a parking lot—and someone's filmed the experience so we can all watch the action.

This friendly, unofficial battle took place at the 2014 Gyeryong Military Culture Festival between the III Marine Expeditionary Force Band and the Republic of Korea Army Band.

ROK kick things off drumming up some pretty impressive stick-banging, but then U-S-A, U-S-A! steps up.

You just know there are reputations and, most likely, rounds of beer at stake. So there's everything to play for.

It's a good show from the marines, who edge over to the Korean drummers and play on their drums too, just to show-off. While the Korean band show how good-spirited it all is by dancing along to the US effort.

And, although it looks like one of the band leaders calls a tie, I think, from an entirely biased point of view, the marines do actually win. 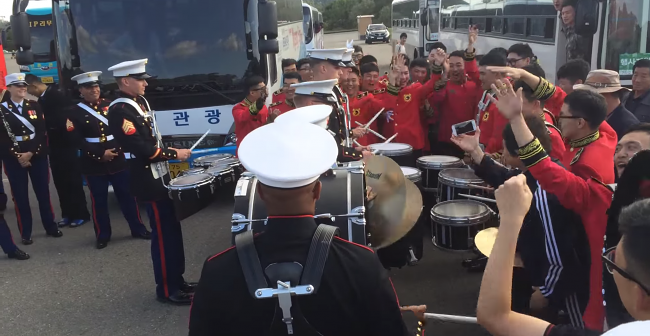