While the US and its coalition of Arab and European states continue to bomb the brutal organisation known as Islamic State, Iraqi TV station Al-Iraqiyya TV recently waged cultural warfare in the form of a promo for new anti-ISIS parody series The Superstitious State.

The promo came in the form of a music video, which aims to pile insult upon insult onto ISIS by showing Satan and a Jewish lady giving birth to the jihadist organisation through an egg. It also features The Joker, Stalin, and plenty of other weirdness. Think the producers might be fans of Matt Stone and Trey Parker?

Islamic State are known for their brutality, like their fondness for beheadings and other shocking acts to make people fear and respect them—the Iraqi TV show aims to take some of the sting from their tail by humiliating the crap out of them and making people laugh.

The series, called "The Superstitious State"—a play on the words "khilafa" ("caliphate") and "khirafa" ("superstition")—features an assortment of colorful characters, including a red-clad devil with a pitchfork, whose union with a Jewess—wearing a large Star of David—begets an "ISIS-ling" in the form of Abu Bakr Al-Baghdadi, hatched from an egg. Other characters in the cast include Sheikha Mozah, wife of the former Emir of Qatar, a gun-toting, grog-swigging American cowboy, the Joker from Batman, Dracula, and a character presumably representing Stalin. The promo was broadcast on the Iraqi TV channel on September 9, and is being shown several times a day since.

The promo ends with a slow-mo shootout and and an explosion, a warning to the jihadis that no good will come to those who make deals with the devil. Let’s hope the series does what it sets out to do, and gives the Iraqi people back some of their resolve.

The modern media landscape truly is a strange and extraordinary place. 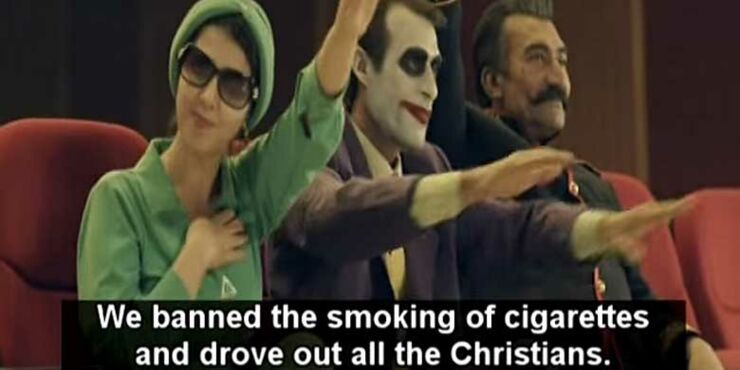