The power of Beethoven meets the power of metal in this incredible cover on electric guitar by 17-year-old virtuoso Tina S. The French guitarist who lives in Paris has been playing since she was just eight-years-old and is now something of a prodigy. She was taught and filmed by her guitar instructor, Renaud Louis-Servais.

Sure, a heavy metal arrangement of Ludwig van Beethoven's "Moonlight Sonata (3rd Movement)" might not be the most obvious choice when you want to rock out, but when you hear it played like this, well, it just works.

The piece was arranged for electric guitar by Dr. Viossy, renowned as an italian virtuoso guitarist both in Hard-Rock and Prog/Neoclassical Metal thanks to his famous renditions of some of the greatest Classical masterpieces. And on a scale of 1 to 10 of difficulty to play, Moonlight Sonata is an 11.

Tina S shreds her way through this metal version, playing at high speeds with a look of acute concentration. And her hands don't look like they're touching the strings at all, but they most definitely are.

This isn't the only style she can play either, this is just one of many of her different takes. Browse through her channel and you'll see she can play blues rock, acoustic, covering tracks like Metallica’s “Master of Puppets,” Pink Floyd's "Comfortably Numb", Van Halen's "Beat It," even Adele's "Someone Like You."

Let's just remind ourselves that's she's ONLY 17 YEARS OLD. She's still learning, imagine what she'll be like in a few years' time. This guitar virtuosa will shred her Vigier Excalibur Custom guitar like a rock goddess.

Maybe following in the footsteps of the likes of Slash and Dave Gilmour. 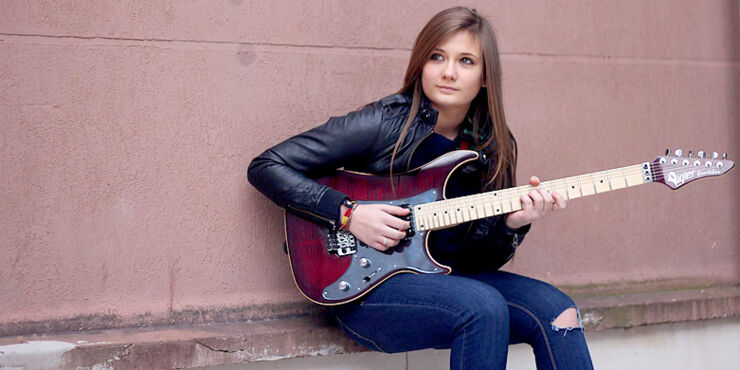