So, Donald Trump is now the sole candidate for the GoP's presidential nomination as Ted Cruz and John Kasich have both thrown in the towel. It's terrifying stuff. One way to deal with such a thing is to laugh through the tears.

You'll be able to do that with this parody music video featuring The Daily Show's comedic creation Black Trump. Roy Wood Jr. plays the rapping African American version of the would-be leader of the free world and this debut music video sees him laying down the lyrics to a song called "They Love Me."

It features such gems as “If Ivanka weren’t my daughter, perhaps I’d be dating her” and “I’ve never seen a thin person drinking a Diet Coke.”

Given the nature of rap music's inclination for profanity and offence, Trump's ramblings sound more suited to this format. Although no less ridiculous.

"Trump doesn’t belong in the White House. Donald Trump belongs in a rap video,” Wood Jr. told The Daily Show host Trevor Noah. “Everything Trump says is straight out of a rapper’s play book. He brags about his money, he’s disrespectful to women, and there’s always fights at his concerts. You could make an entire rap song with just Donald Trump quotes. All you need is a dope beat.”

So that's exactly what Wood did. Let's laugh while we can, because a much graver reality might well be upon us soon enough. *shudder* 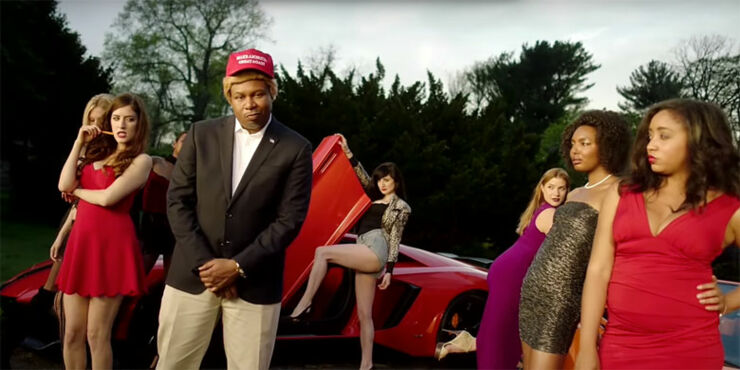