The last thing you ever want to encounter while out diving is a great white shark. Which is precisely what 22-year-old college student Tyler McQuillen bumped into when he was out spearfishing off the coast of Santa Barbara, California. It's not really something you want to record for posterity on your GoPro.

The sound of his rapid breathinig in his mask as he makes it back to the boat adds to the reality of the situation, all that was missing was the soundtrack to the Jaws movie, that would have been too scary.

McQuillen was only in 10ft of water when he felt something grab at his back. Initially he thought it was his friends pranking him and it caused him to drop his speargun. What he hadn't realised at this point was that a 12ft shark had nibbled on his toes and was probably going to nibble on more of him.

But McQuillen managed to reclaim his speargun and, realising the possible danger he was in or just firing on instinct, used it to poke the great white which swam away.

He captured the entire dramatic encounter on his GoPro and uploaded the footage to YouTube.

"I was diving off the coast of Santa Barbara at Refugio Point Sept 1st when I was hit in the back, I thought it was my friends playing a joke on me," he explained. "I lost grip of my speargun which I quickly retrieved and then it hit me. A HUGE great white which was at least 12ft long attacked me from the left side. It quickly circled around me and I used my speargun to keep it away."

OK it might be more a shark bump than a shark attack, but it's pretty crazy nonetheless.

No doubt be he is grateful that the most he came away with was a bleeding toe, which you can see below in a photo he posted online. 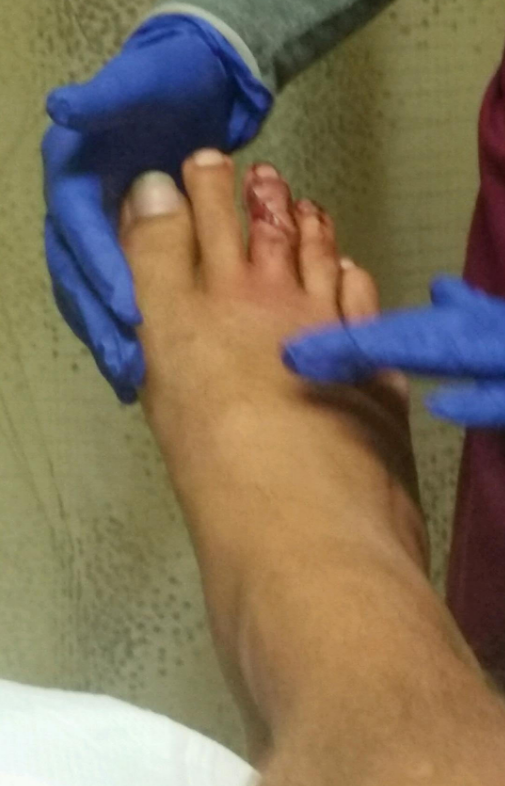