Last year Banksy opened art exhibition Dismaland in the form of a subversive theme park in the UK coastal town of Weston-super-mare. Not only did it draw sellout crowds but it was estimated to have generated an extra £20m for the local economy. One of the main inspirations behind the slum-Disneyland aesthetic tone of the park is considered to be American artist and painter Jeff Gillette.

Gillette has been painting scenes of Disney characters juxtaposed with post-apocalyptic landscapes, landfill sites, and slums for over 20 years. He now has a new show in London at the Lawrence Alkin Gallery called Post Dismal, trading on the success of Banky's Dismaland and bringing new audiences to his work.

The show features a collection of 15 paintings which, in a meta chain of influence, are in turn inspired by Banksy's Dismaland project. "I would like to think that I had a part in the inspiration for Banksy's satirization of the magic kingdom," Gillette explains to The Creators Project, "but I've maintained, even to Banksy in an email, that I felt that we have 'similar sensibilities.' Dismaland itself had some strong similarities to the real Disneyland: long lines, and unhappy workers. It also had the excellence that Disney maintains in its productions and presentations." 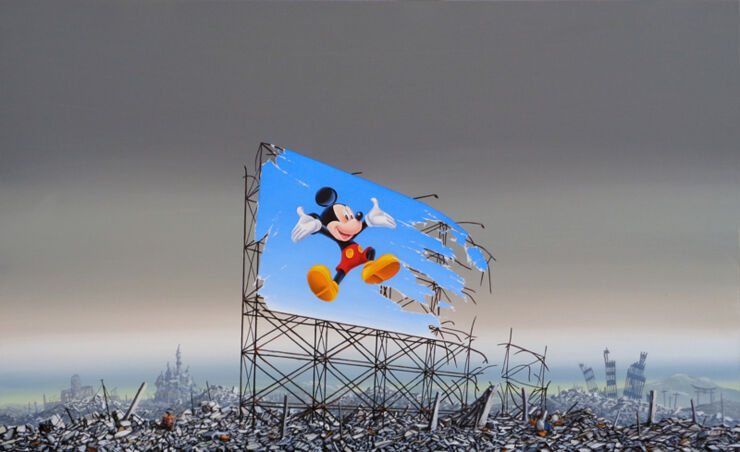 In Gillette's new paintings we see Disney icons like Mickey Mouse on a billboard in the middle of a devastated post-nuked Nagasaki or the Cinderalla Castle in the 'Jungle' refugee camp in Calais—looming large, looking tatty and disheveled, with migrants, pop culture figures like Beavis and Butthead, Cookie Monster, and Dismaland workers wandering among the tents and ruin.

"When I was 32 years old, I purged myself of my old art, burned it all, then moved out of Michigan to start over," says the artist. "I moved to Orange County, home of Disneyland. I began to paint Slumscape Paintings, embellishing them with different out-of-place elements, most often the most beloved Disney icons." 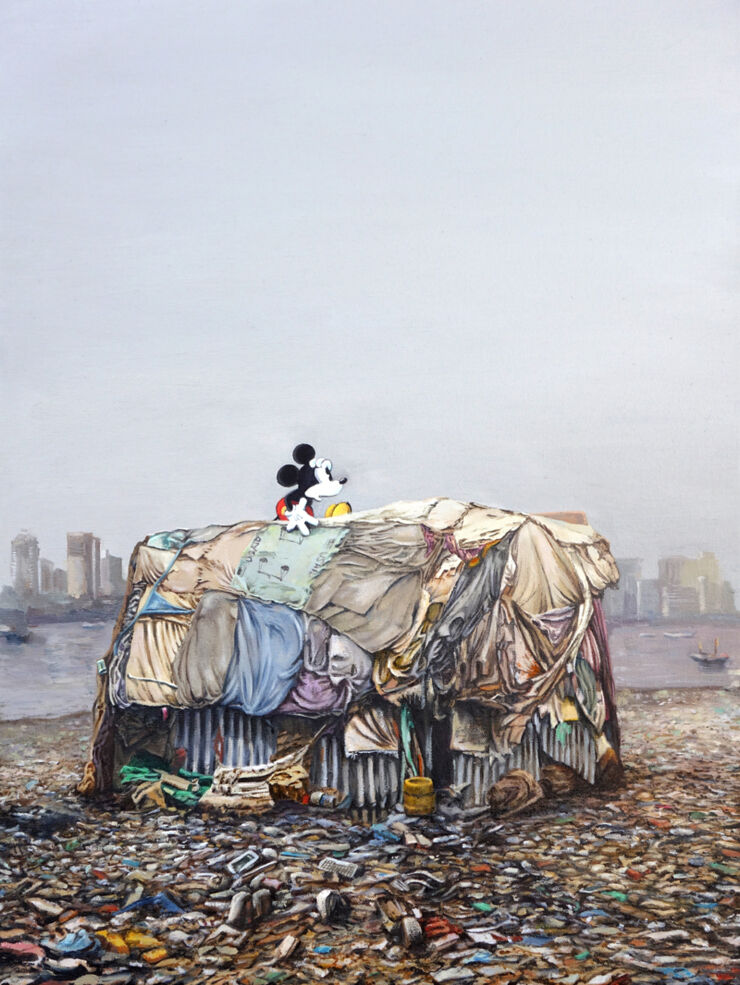 Mickey Slum Shack One by Jeff Gillette. Image courtesy of the artist

The settings of the Slumscape paintings also hold a journalistic or "photo-documenting" element, because Gillette often visits the places he depicts, capturing these transient shanty towns and settlements in places like Mumbai, India and elsewhere, before they're destroyed and the inhabitants are moved on—documenting their evolution and ever-changing sizes. "Since the shacks are often, illegal, informal settlements, they are subject to being razed by authorities. So in some ways they are documents of transitory environments," Gillette says.

Disney themselves have never taken any legal action against Gillette's work—he says it's more mild parody then anything too threatening. Plus it's the sanitized capitalist symbol of what corporate Disney stands for rather any of their particular artistic output that Gillette is satirizing. 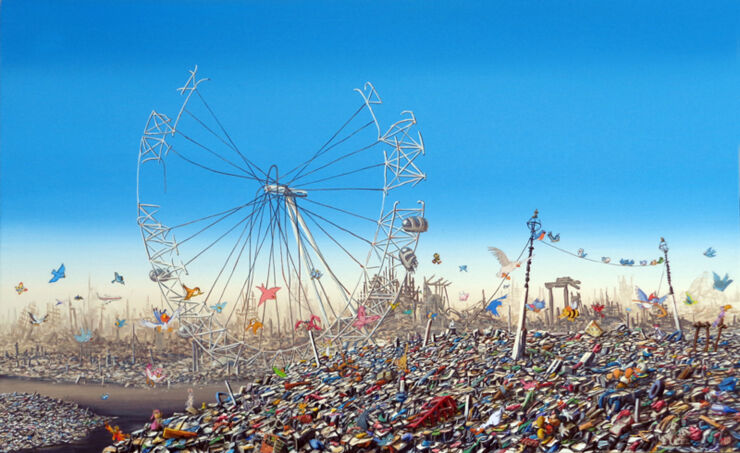 London Eye by Jeff Gillette. Image courtesy of the artist

"Maybe not being able to go to Disneyland as a child threw me off," Gillette explains. "Or perhaps my own crappy childhood makes me want to tarnish the feigned joy of a pre-pubescent wonderland for others, or tap into the suspect view of others that see the whole system askance, with the Disney corporation being emblematic of society's attempt to mask over the overwhelming ills. Maybe me seeing so much of the real world of polluted, overpopulated, impoverished cities has made me feel that a place that proclaims itself to be the 'The Happiest Place on Earth' is painfully absurd."

He does, however, have a favorite Disney movie—or Pixar movie anyway—and that's Wall-E, which is fitting. "It is a harsh satire in its own right on contemporary civilization," he notes. 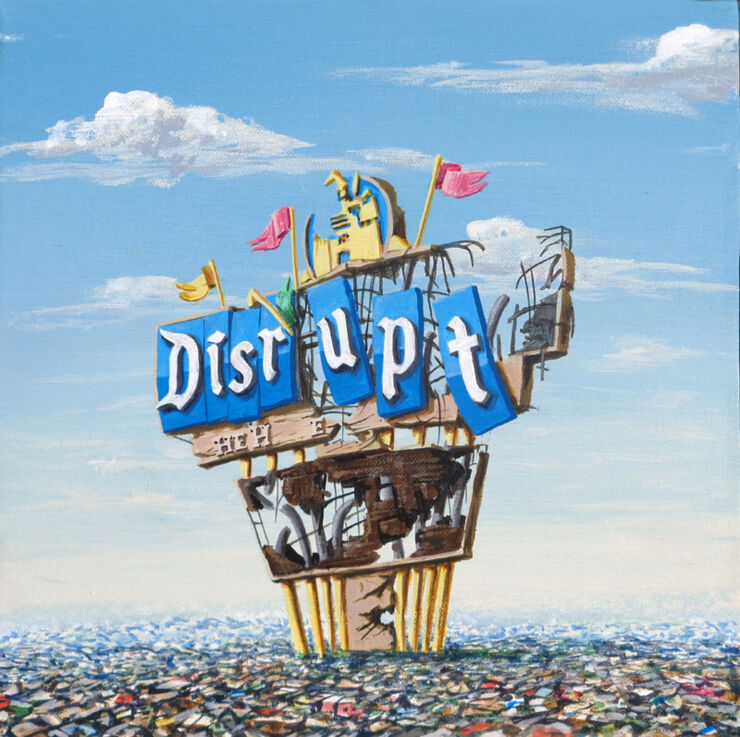 It's not just Disney that influences Gillette's paintings, though; he also takes a lot of inspiration from the thoughts and writings of 19th century German philosopher Arthur Schopenhauer. Schopenhauer is a pessimist, resigned to the fact that the world is senseless, lacking meaning and reason. It's all just mindless, inescapable chaos and destruction. (The nihilism of Rust Cohle's character in True Detective is influenced by Schopenhauer's philosophy.)

Gillette came to the philosopher's work when he was a volunteer in the Peace Corps in the late 1980s travelling in Nepal and India. While there he spent a lot of time reading and some of the texts he brought with him that really struck a chord were by Schopenhauer. "It was like a breath of distilled lucidity, confirming to me the perpetually miserable state that everything is in," Gillette notes. "To Schopenhauer, irrationality controls the universe, flung along by a blind, flailing will-to-live instinct, mired in pain, wanting or ennui." 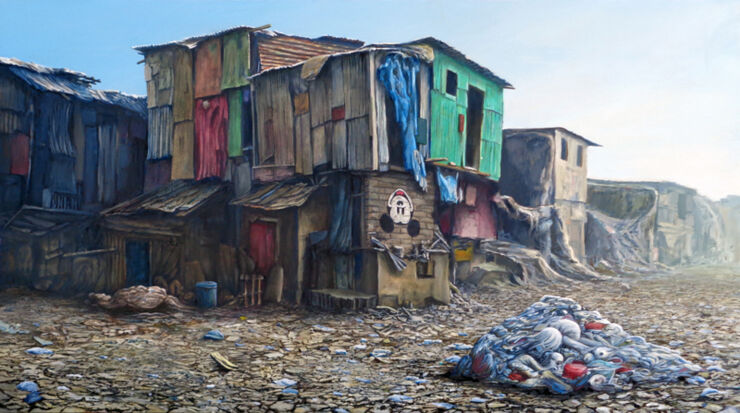 Bandra Green by Jeff Gillette. Image courtesy of the artist

Along with the teachings of Buddhism that life is suffering, it resonated deeply with the artist. It's not all doom and gloom though, because in Buddhism, relinquishing the ego and desire can end suffering. For Schopenhauer, a way to end both is through aesthetic and artistic contemplation. So Gillette's art is both an acknowledgement of the crappiness of the world and his own salvation.

"Being in Nepal for two years, I was mired in a mystical sense of a simple life surrounded by natural beauty and wonder," Gillette says. "Often, I would leave and submerge myself into India's megalopolises and visit the immensely oppressive, ugly slums. Somehow the two opposites merged where the cacophony of visual chaos of the slum became my beautiful muse. My Slumscape paintings have become visual representations of what Schopenhauer describes as the worst of all possible worlds. The post apocalyptic landscape paintings are an even more dire representation of the idea of a world gone wrong." 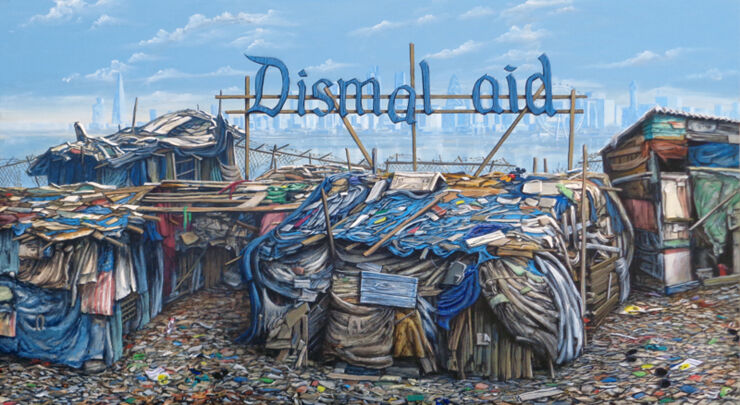 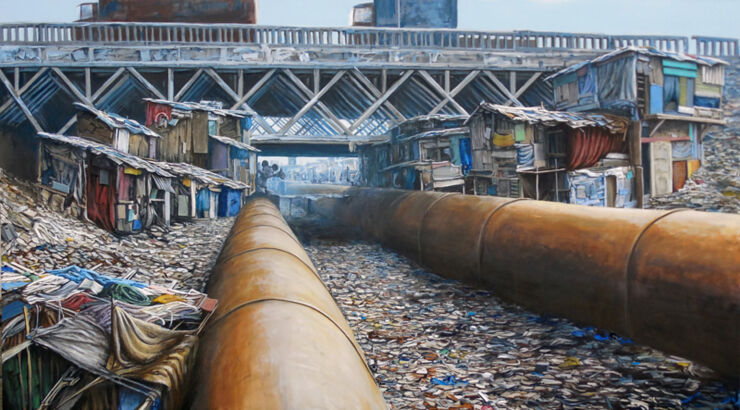 Gates by Jeff Gillette. Image courtesy of the artist 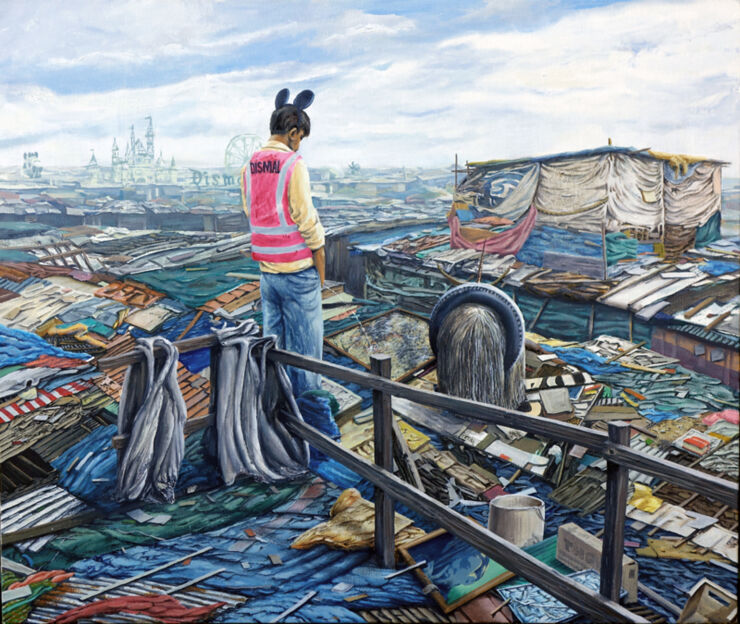 Transition Dismaland by Jeff Gillette. Image courtesy of the artist 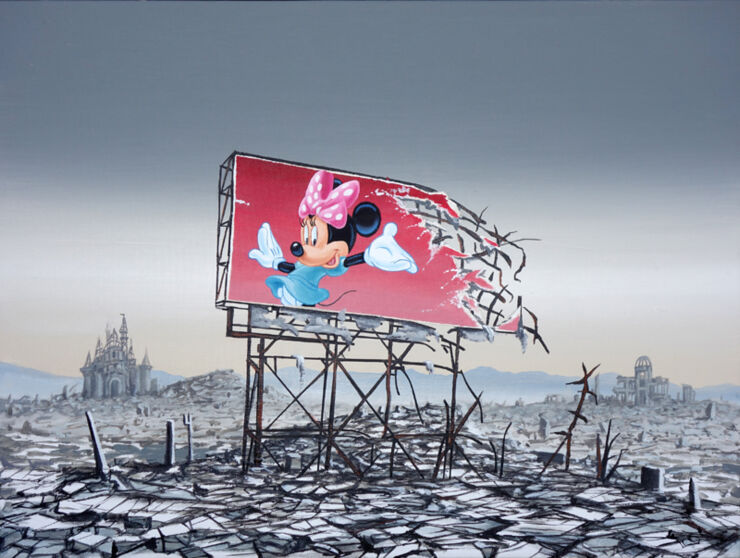 Post Dismal by Jeff Gillette is on now until July 23, 2016 at Lawrence Alkin Gallery, Soho, London.