The Walking Dead Season 7 is set to return to our screens very soon, and with it viewers will finally learn which character gets it at the hands of Negan and his cherised Lucille. The opening episode for season 7 is going to be a grim one too, according to the showrunners.

But, fans of the show are used to things being grim, that's the show's modus operandi. So it comes as something of a strange juxtaposition to hear one of the world's most beloved and legendary comedians, John Cleese, cheerfully recap the show from season one to season six.

It works though, as Cleese notes all the key points that have happened while also injecting some humor into it all—and remarking on a few Walking Dead lessons that people who are unfamiliar with the show need to know.

It doesn't shy away from the show's trademark gore either, displaying plenty of gruesome scenes, facing being bitten off and the like. But the horror comes with plenty of gags, along with plenty of knowing jokes for dedicated fans. His 'off the cuff' comments about how the bad guys are actually pretty decent chaps are hilarious.

The video was made for UK streaming service Now TV and it's the perfect way to run down what's happened over the 83 episodes so far, before Sunday night's new episode resolves the biggest TV cliffhanger since season one of Lost. As Norman Reedus (Daryl) said on the Jimmy Fallon, "a lot of people will be kicking their TV sets."

“I can’t get enough of The Walking Dead," said Cleese. "The beautiful scenery, the emotional depths of the characters, and most of all, the gentle sprinkling of horrific barbarism. Hopefully fans will think the video is dead funny, and if not, I might just have to introduce them to Lucille personally.” 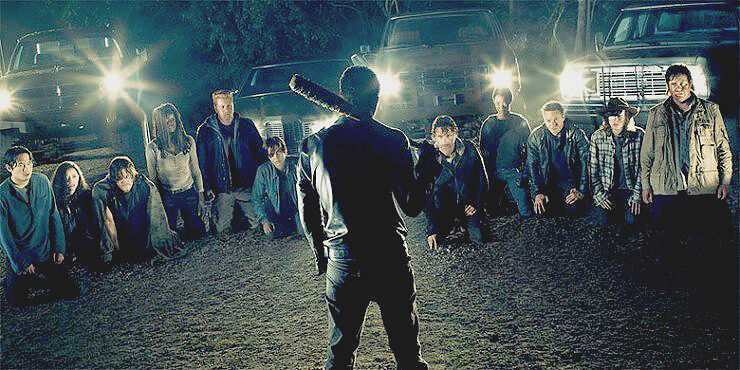