With the benefit of hindsight we can look back at 1985's Back to the Future and question, did the film predict the tragic events of September 11, 2001? And the answer is: hell no!

But this parody doc called BACK TO THE FUTURE 9-11 prediction !!! [Illuminati Conspiracy] is great at showing how, if you're creative enough and you look hard enough and crazily enough, you will find 9/11 conspiracies anywhere.

With a serious-sounding voiceover and a powerful imagination, it finds evidence littered throughout the movie of an Illuminati conspiracy surrounding 9/11. From the clock tower scene, where the hands of the clock indicate the numbers nine and eleven while Marty shouts "Doc! I have to tell you about the future!" to the fact the mall is called the Twin Pines Mall, it presents a perfect sendup of the 9/11 Truth movement.

And then there's the name of the company who made the video. Apophenia Productions? Apophenia is seeing connections or patterns where there are none.

Of course, that could all be part of the conspiracy they are portraying, shrouding things with smoke and mirrors, it's what the Illuminati do all the time. Isn't it? 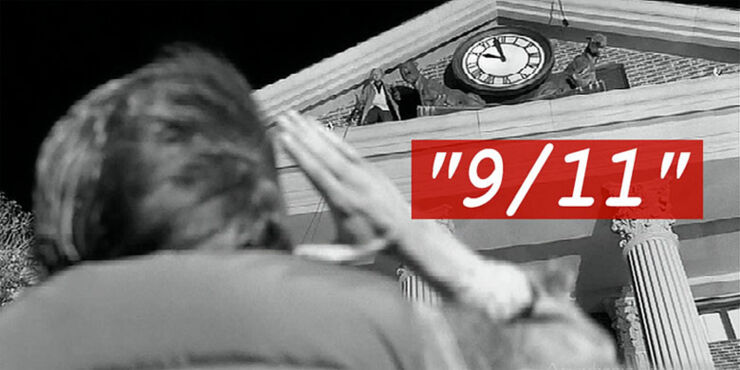