Aaron Singer (aka YouTuber Aaronsafilmnerd) made his dad internet famous when he uploaded a failed vlog project of him and his dad conversing in the car. Aaron asked his dad various questions for a school vlog and his dad got increasingly uptight.

He couldn't quite fathom why his son was asking such inane questions ("If you could go to any night club in any country in the world and it's one night, what country would the nightclub be in?"). It made for a perfect comedic storm.

The video got over a million views and his dad lived with the fleeting consequences of internet stardom. "He doesn't use the internet that much so it wasn't such a big deal for him when the first vid went viral." Aaron told us. "He mostly just got annoyed that he had to talk about it with people at the office and stuff. He also once got recognized on the street by a construction worker."

Now Aaron has filmed his dad again, again in the car, but this time on the way to a party, the brilliantly named Joey Sbaffoni's party to be precise. And his dad again gets a little bit uptight, especially when Aaron gets nervous about the upcoming gatheriing.

"He tends to get angry with me when he gets frustrated, like if I space out while he's trying to tell me something that he thinks is important." Aaron says. "I think there's also just a generational gap thing that makes him get frustrated, we're kinda similar in some ways, but also, in some ways we're definitely very different."

And that difference makes for very entertaining viewing. 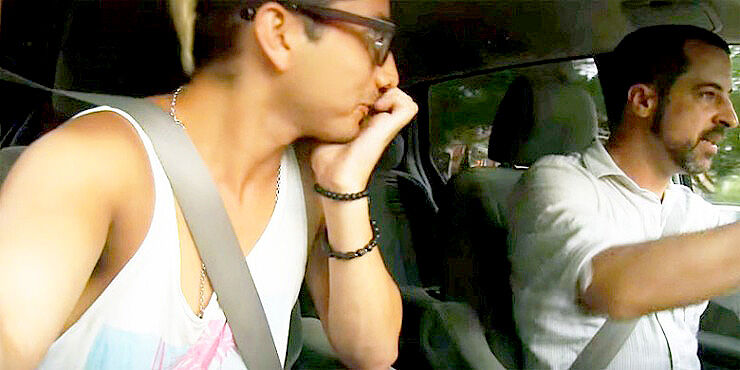