Sometimes all it takes is a bit of overdubbed commentary to elevate something to the next level. Take this video of a fight between two iguanas for instance. It's already a pretty impressive piece of footage where two lizards duke it out like a couple of drunks in a bar brawl after a night on the sauce.

But it's taken to new levels, levels of comedic brilliance, by the simple addition of an Australian man's voice. Not just any Australian man though, but Ozzy Man from YouTube channel Ozzy Man Reviews.

It's there where he gives his no-nonsense take on TV shows, films, viral videos, or anything he feels needs a straight-talking bloke from Perth, Australia to cut through the bullsh*t and deliver the goods with.

The iguana fight doesn't just become another iguana fight to add to the rest under Ozzy Man's watch. Hell no. Instead it becomes an epic battle between two giants. It becomes Japanese Godzilla versus American Godzilla.

As Ozzy Man explains himself it's essentially, "Me running commentary on a mini Godzilla lizard fight plus meta analysis of the moving picture franchise."

It hilarious and makes for some very sweary but but very funny viewing.

As someone notes in the YouTube comments, he could do commentary on paint drying and it would make for thoroughly entertaining viewing. And i for one will be watching it if they ever make it. 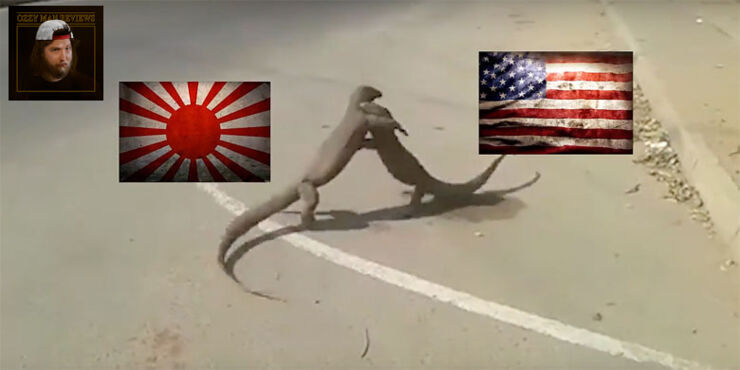