A new film commissioned by British charity organization Veterans For Peace UK reveals the brutal realities faced by soldiers after they've fought in conflicts and witnessed first hand the horrors of war.

The dark twist is that it's presented as a mock advert for 1980s toy du jour Action Man.

Action Man figures used to come in all different types and styles representing the various factions of the British armed forces. But the toys in this video reveal the grim, less heroic side of war.

To challenge the British Army's policy of recruiting 16 year olds into dangerous roles, the video reveals a range of toys that see Action Man as a drug addicted PTSD sufferer, wheelchair bound, and least subtle of all: dead.

Titled 'Action Man: Battlefield Casualties', there's a dark humor running throughout and it's all shot in the style of a 1980s Saturday morning kids commercial. It certainly makes an impact.

The website behind this campaign states, "The UK is one of only nineteen countries worldwide, and the only EU member, that still recruits 16 year olds into its armed forces, (other nations include Iran and North Korea)."

It goes onto say, "It is the poorest regions of Britain that supply large numbers of these child recruits. The army has said that it looks to the youngest recruits to make up shortfalls in the infantry, by far the most dangerous part of the military. The fatality rate in Afghanistan has been seven times that of the rest of the armed forces."

Grim stuff indeed, but a clever way to get an important message across to young people. 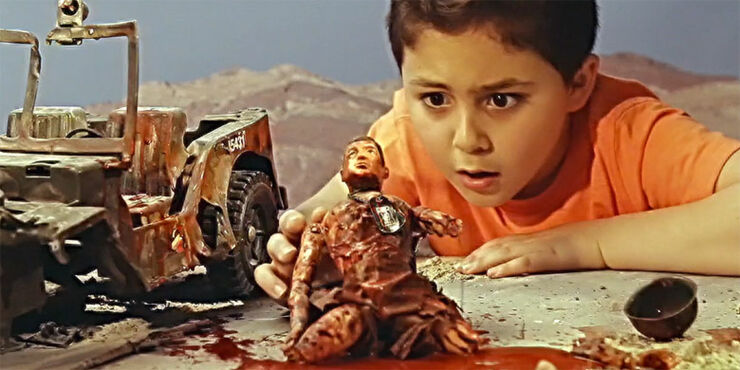