The Simpsons couch gag is a long-running visual joke for the show, but it's also become a place where animators and filmmakers showcase their own unique takes on the idea.

From Banksy, Sylvain Chomet and Guillermo Del Toro, to Don Hertzfeldt and Rick and Morty creators Dan Harmon and Justin Roiland, it's an iconic piece of pop culture that blends well with the themes and styles of other artists.

And now British stop-motion animator Lee Hardcastle, known for his violent and amusing claymations—including Frozen meets The Thing and Ghostbusters meets Quentin Tarantino—has created what must be the most violent version yet. It isn't an official couch gag, instead it seems to have been created just for the sheer hell of it. And hell is the optimum word.

Hardcastle mixes the gag with the gruesome home invasion horror of Adam Wingard’s movie You’re Next. And the results are, well, very, very bloody.

And dark. Oh so dark.

But it's brilliantly done and shows that Play Doh, in the right hands, is more than just mere child's play. 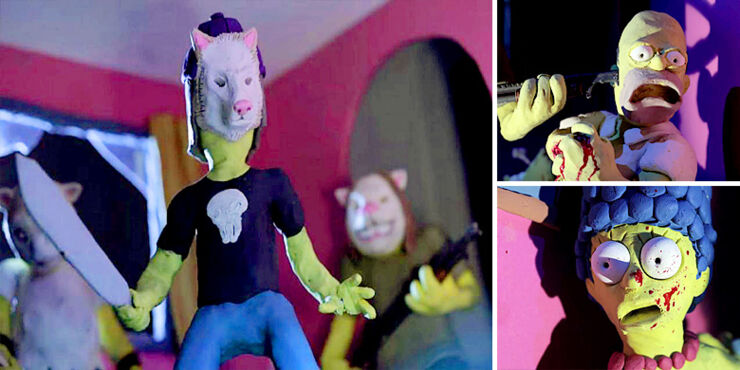